CBS believes they found the next John Madden of commentary 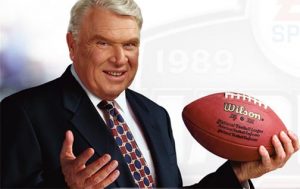 John Madden is one of the best to ever do it, but could Tony Romo be the next Madden?

John Madden was one of the best commentator’s to ever live.  The former Raiders coach was a beast at breaking down film and plays on the field, and when he added the additional “Boom” to the feed it made it that much better.  Well CBS hired Tony Romo recently and they feel he has tons of potential.

At the Ben Hogan award ceremony, CBS Sports producer Lance Barrow had some amazing things to say about new broadcaster Tony Romo, who has not yet made his first official on-air appearance with the network. He thinks Tony is special, but how special?

“I think he is going to be great,” Barrow said, per Clarence Hill of the Fort Worth Star-Telegram. “I think we have the next John Madden on our hands.”

I am not too sure about this comparison but we shall see…..