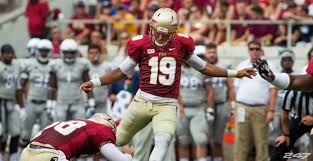 Buccaneers K Roberto Aguayo needs to step up this year

The Buccaneers were not impressed with their second round pick in 2016 Robert Aguayo. He was not the most accurate kicker like he had been the previous year in the NCAA for Florida State. This off-season the Buccaneers signed Nick Folk and brought him on as competition.  Aguayo spoke to the Pewter Report, and said he is ready to compete now.

“It is motivation,” Aguayo told PewterReport.com. “When I was in college there would be walk-on kids come in and I didn’t know who they were or if they were good or whatever. But whoever they were, it was always a competition for me. Just seeing someone else out there trying to compete. I like it.”

“I look at it like playing golf,” Aguayo said. “When you go out there playing by yourself you are playing to shoot par or shoot your best, but when you have someone else out there it’s like, ‘Well he hit a good shot so I want to hit a good shot.’ So it is good motivation for both of us and it is just going to make both of us better. And the better one will come out on top.”