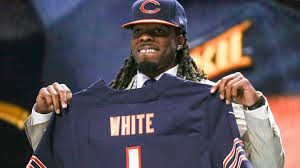 Kevin White of the Bears could miss the entire season

White was held out of practice on Tuesday, and the team has him listed with a left leg injury, according to Rich Campbell.

This is pretty sad, the man has been in the league for 2 years and he has not been too productive. This is the man that the Bears were hoping would take over for Brandon Marshall and Alshon Jeffery, but that has not been the case.