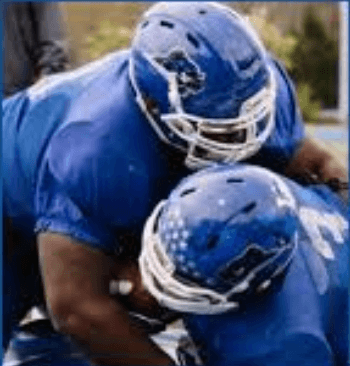 Steve Wallace is a monster of a man. Heis a true run stuffer.

NFL Draft Diamonds website has been providing our readers Prospect Interviews over the past 3 years and this year we mixed things up a bit. Our questions are designed to give our readers a little more insight on the draft eligible player. We hope to bring you more than 500 interviews of NFL Draft Prospects this season. You will be able to track them all on the front page of our website in the banner to the right.  Now let’s meet our next prospect!!!

The most pleasant thing that I’ve off the football field has to be donating can goods from our Spring Game to the local food pantry in Columbia, Ky. The mere sight of seeing someone’s day being made by sacrificing a small amount your time and effort has to be the most entertaining thing in this world.

The most consolidating class that I struggled with during my collegiate years has to be, hands down, U.S. Government. It wasn’t the fact that I didn’t comprehend the material. But the professor’s rigid coursework made sure that you had an unyielding work effort for not only his class but for college. Learned many life lessons during that semester.

The most prominent individual in my life has to be my father. Steve Wallace Sr. (My dad) has been the foundation throughout the years. Even when times got tough with football, life, school, or anything else he always had the wisdom that would end my worries on any situation. My father gave me the best tool to deal with any fourth down that life has to throw at me through the game of football.

I played a numerous amount of sports growing up: Baseball, Basketball, Wrestling, Lacrosse, and Track and Field

The one thing that separates me from any DT’s in the 2017 Draft class is my film. All the characteristics of a player maker is emphasized in my highlight tape.

When looking at film against my next opponent, I look at the film from a LB’s prospective. I try to find any and every key that could possibly help me out on Saturday

Coming from Atlanta I’ve played against SO MANY athletes, so it’s a tad bit hard to say. 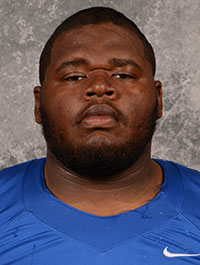 I can’t compare myself to any NFL player just because I simply haven’t made it to the same level as them. But I try to model myself after the DT of the Indianapolis Colts, David Parry. We have the same body frame and work well in the trenches

The biggest obstacle that I have had to endure throughout my life is my size. My Father is a 6’6″ 2x All-Pro Left Tackle and people my whole life have been trying to tell me that there is no way I could be as dominant of a force as him because of my size. During my recruiting days in High School, the favorite thing coaches loved to say to me was “if you were only 2 inches taller”. I made it my point to turn those doubters into believers.

Pre-Game Rituals consist of showers, sleepless nights, and talking to my dad.

My biggest strength has to be my IQ of the game. My dad forged my Understanding of the game of football at a very early age. Seeing him man handle HOF’s at the Blind Slide position gave me the ability to see how the offensive line reads certain things.

My biggest weakness has to be that I’m not a Combine Warrior. I’m not going to put out crazy numbers during these drills to show that I have “potential”. But look at my highlight tape and tell me that I don’t have undeveloped talent.

If you’re looking for someone with heart you’re looking at the wrong place because I have passion for this game we call football. People with great passion can make the impossible happen.

My favorite football team has to be the Atlanta Falcons. I’m a hometown boy and have to cheer for the boys back home. Sorry Dad and 49ers organization.

The people who have the most influential impingement on the game.

The first big ticket item that I would purchase would have to be a Money Market Mutual Fund. In order to provide for my present and future family after football, it’s a great way to invest not only in yourself but also in your love ones.