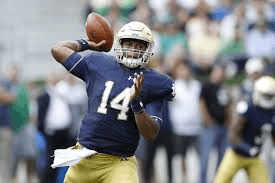 Notre Dame head coach Brian Kelly was highly criticized when he said his quarterback Deshone Kizer should have stayed in school another year, stating there was room for improvement.  Well the Notre Dame coach was not done. Today in an interview with PFT Live, he made another comment, and he is basically saying he is not ready for the NFL.

“My comments were really specific about just maturing as a person,” Kelly said. “We want our guys to come to Notre Dame and develop holistically in all areas. So being at Notre Dame for a couple years does not give you that chance. When we turn over our young men to the NFL we want to say they’re finished products and DeShone’s not there yet. He needed more time. We clearly understood his decision to go to the NFL and we supported him, but I was merely saying that, again, he’s a young man that could use more time at Notre Dame. He’s a wonderful kid, he’s got great character. . . . Whoever gets the chance to draft DeShone is going to get somebody with great character and somebody that’s just scratching the surface as it relates to his football ability.”

As crazy as it sounds, I see the same thing on film. I agree with his coach.