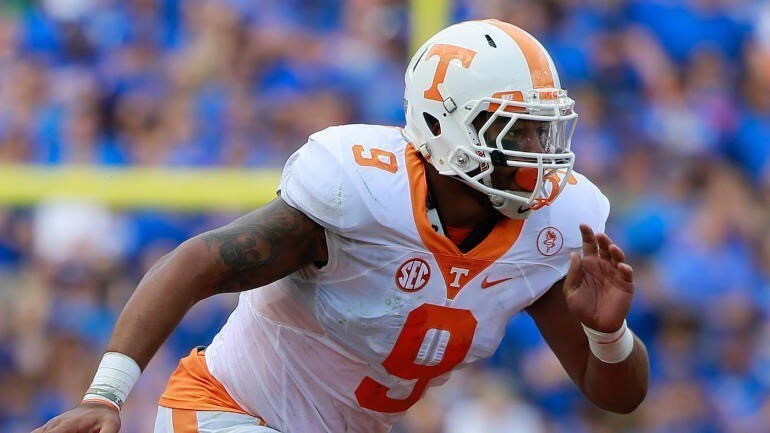 Pros: Thick frame. Has produced every year he’s played, including as a true freshman. Set school records such as most sacks and tackle for losses as a true freshman. Also surpassed Reggie White’s sack record at Tennessee. Stats are eye popping (double digits sacks every year), but it’s his technique that sets him apart. A true pass rusher who can use his hands frequently. Even if grabbed up, Barnett continues to fight and has a motor that doesn’t end. Quick off the snap of the ball and can bend naturally around the corner. Maintains the edge and has great lower body technique that can allow offensive lineman to keep their feet moving. One of the things that doesn’t show up on the stat line is his ability to take away running lanes and forces half backs to change direction. Watching tape, he blows up plays and has helped other teammates get tackles for losses. Very versatile, has moved from side to side. Also has long arms and has some of the best hand techniques you’ll see in a defensive end. He’s relentless and always tries to make a play.

Cons: Quick, but not explosive speed. Also not exactly a twitch kind of guy. Guesses snap counts and has been penalized. He relies on jumping the snap more than he should. This could cause more penalties in the NFL, however if he can master the snap count, he could be really good. Sometimes he plays too high. He has lower body strength to help counter it, but some offensive lineman can use this to their advantage and keep him out of plays. A big issue is before his junior season, he would use his shoulders more than he should rather than use his hands. He also had trouble finishing plays earlier in his career. Might be asked to gain weight, so unsure if that could hinder his play. Must also get better at winning on the inside, as he relies a lot on winning with the edge.

Overall: Barnett has all the potential to be one of the best defensive players from this draft. He is a natural pass rusher that could give offenses nightmares for years to come. Every aspect of his game has gotten better as years have gone on. My biggest gripe is that he does need to be more consistent with inside moves. If he gains the ability to counter attack from using the edge to moving inside, he will be a deadly force in the NFL. In a ton of his game tape, you would see the offensive tackle sell out to try and get to the edge quickly, and Barnett still won matchups. There’s a lot to like about Barnett. At the age of just 20, there’s so much upside to Barnett. He has the potential to be something special.

This report was conducted by Sean McMahon. Go follow him!!