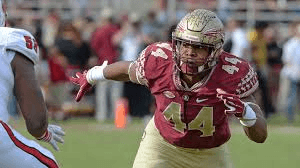 A consensus 4-star recruit in the 2013 class out of Sandalwood High School in Jacksonville, DeMarcus Walker was originally committed to Alabama before flipping to the Seminoles of Florida State. Appearing in 10 games as a freshman, Walker tallied 18 tackles (2.0 TFL) along with 1 sack for the 2013 BCS Champions. 2014 saw Walker finish his sophomore campaign with 38 tackles (6 TFL), 1 sack and 1 forced fumble. That season ending with a crushing defeat in the National semi-final against Marcus Mariota and the Oregon Ducks. 2015 began the rise of DeMarcus Walker. Finishing the year with 56 taclkes (14.0 TFL), 9.0 sacks and 3 forced fumbles. The 2016 year for the senior saw Walker finish with career highs in most categories. Leading the Seminoles to a 10-3 record with a victory in the Orange Bowl over Michigan; Walker finished with 67 tackles (19.5 TFL), 16.0 sacks and 3 forced fumbles.

I believe DeMarcus Walker can be a solid starter in a 4-3 defense as a LDE with the ability to move inside on obvious passing situations. Has the ability to be a 7-10 sack/per player in the NFL.