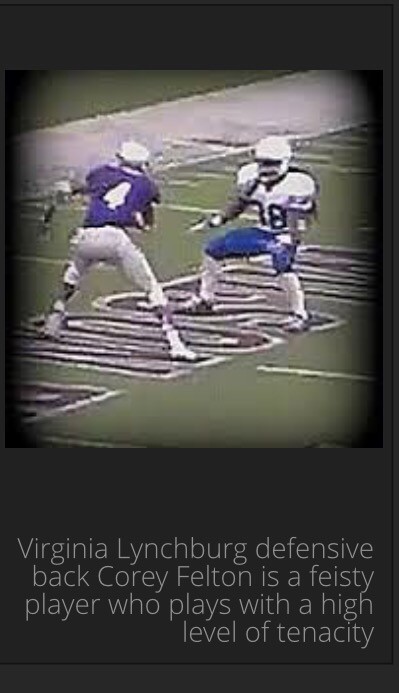 Pros: Active hands in the run game, which allows him to shed blocks. Experience playing special teams and always looking for someone to block on kicks and punts. Doesn’t shy away from tackling. Does a good job mirroring receivers. More fast than quick. Even though he’s 5’8″, his vertical jump was 36 inches, which would tie for 13th at the Combine this year. Seems a lot more comfortable playing man coverage. Mirrors receivers well. Can move down the field and get to where the ball is. Fluid hips. Can read and react. Doesn’t over pursue in special teams plays.

Cons: Only 5’8″, which may cause a lot of question marks if playing against taller guys. Would help to gain some more bulk. Not much playing time, so a small sample size when it comes to game tape. Sometimes a little hesitant when it comes to screen passes, even though he plays until the whistle and doesn’t give up. Raw in a few aspects, will be questions as to how he plays in different schemes.

Overall: While Felton doesn’t have a ton of game tape, there’s still quite a few good things while watch the tape. A fast player who seems to excel in special teams, he may also be a nickel cornerback in the next level. He has fast hips and plays aggressive, so some teams may stick him man to man on the slot receiver or tight end. Question marks are going to be raised when it comes to size and small sample size, but there’s many things to like in the small sample size. There’s been successful players that were on the shorter spectrum. Felton has a chance to play on a NFL team, even if it’s mainly special teams. He has a knack and drive to run down the field and make a play