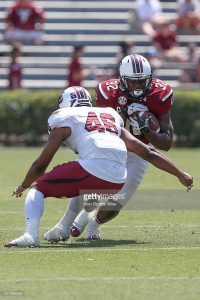 Cedrick Malone transferred from South Carolina where he was a super back. He can play LB and defensive back

I 100% agree. The coolest thing I’ve done would be help with summer camps every summer since I was 14 years old. I also help with habitat for humanity as well. I believe that giving back to anyone in need is one thing I was put on earth to do.

The hardest class that I’ve probably taken would be College Calculus.

My role models would be my mother and grandmother. They are the reasons I am here today. Growing up in a single parent home they taught me everything I know. Just to name a few things they taught me how to be humble, work hard, follow my dreams and have faith.

Up until the 8th grade I played every skill position on Offense. Wide Receiver, Running back, and my best position of Quarterback. I’ve always had a strong arm. I’ve also played Linebacker, Corner, and of course my natural position of Safety.

What separates me from other’s at my position is that I’m very versatile. I can play in the box, in the post, cover running backs, receivers, tight ends, etc. I also think that my will power and blue collar mentality helps me on the field as well.

Some things I look for in the film room would be my opponents weaknesses. For example does he have a false step that will lead you to play and or tell you what play is coming. Just any tiny detail that will give me an advantage on what play may be coming or where they’re going.

I like to compare my game to a few people. Earl Thomas because he has the total package. He can cover, tackle, and can make pay if you throw it deep. Another player would be Eric Berry. He is the total package and he can do it all by playing in the box and all over the field. One last person would be Tyrann Mathieu. His versatility and ball skills are amazing.

I don’t really have any pre-game rituals other than listening to music and taking a walk around the field before each game.

My biggest strength would have to be my versatility and how I am not afraid to do whatever is asked of me and I’ll do it at 110% at the best of my abilities.

My biggest weakness would probably be my soft spoken personality. 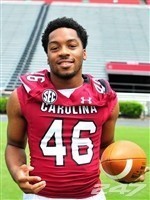 I would tell them that If they give me the opportunity to be apart of their franchise then it would be the best invest of their lives. I will come to work everyday with a blue collar mentality and I will be the hardest working person in the building. I will consistently work on my craft and put the time in to be the best football player I can become.

Without a doubt Sean Taylor. Favorite player of all time. Him and Mike Vick.

If I could have dinner with three people it would probably be Martin Luther King Jr., Barack Obama, and Muhammad Ali. Those three have given back to this world in multiple ways and to be able to pick their brains over a dinner would be incredible.