Bills reportedly interested in a QB at 10; Or is it a smokescreen? 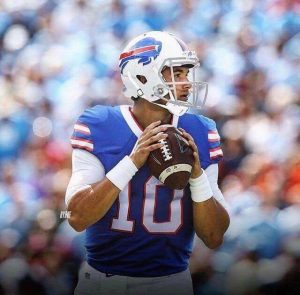 Can you smell the smoke? I can

The only pre-draft visits that are being heavily leaked are of quarterbacks. Bills have had private workouts with over 7 quarterbacks in the draft.  Media believes right now that the Bills are really leaning towards a quarterback at 10.  Ian Rapoport said this yesterday:

“The Bills pick No. 10 and then the Browns’ second pick is No. 12. There is the thought process that the Bills want Mitchell Trubisky from North Carolina, that if they pick a quarterback, (he) would be their top quarterback,” Rapoport said Thursday on Good Morning Football. “And he also may, in fact, be the Browns’ top quarterback. If the Browns want this guy, they’ll have to leapfrog the Bills. You start to look at where that actually can be. The Carolina Panthers at No. 8 — I would not be surprised if they were willing to move back. What about the Bengals at No. 9? Could their be an intra-division trade between the Browns and the Bengals helping each other out? Maybe that’s a little far-fetched, but that’s what everyone is looking for in the first round.”

Albert Breer said today that the Bills are targeting a quarterback with the tenth pick in the draft, and they are very high on Mitchell Trubisky.

I find that very interesting because last week reports came out that the Bills were in love with Deshaun Watson. A week before that Nathan Peterman was the quarterback of choice for the Bills.  It sounds like a bunch of smoke to me.

What about this theory. Are the Bills just doing extensive research on quarterbacks to make sure they do not pass on a guy they feel is a future star?

I think there is more to it. I think they are trying to get someone to jump in the top 10 to help push a team out of the top 10. If you know the Browns want Garrett and Trubisky, then all you need is a top 8 big board, if you are the Bills.  Bills know two of the top 10 draft picks. 20% of the top 10 prospects are known.  This means a player like Jamal Adams, Malik Hooker, Jonathan Allen, or even Mike Williams could fall to them?

It is way easier when you know the other person’s hand.  I do not think the Bills will go QB at 10, and if they do go quarterback this draft, I would expect them to take Nate Peterman in Round 3.  Remember the Bills have Cardale Jones who they drafted last year, they just signed T.J. Yates who is a very solid back-up with starting experience, and Tyrod is under contract.

Why would the Bills draft a quarterback with the 10th pick? Do you think they will cut Cardale?  That is Doug Whaley’s guy, who he said he feels can be groomed into a starter.  Just sit back and think about this, if you can stand the smoke.