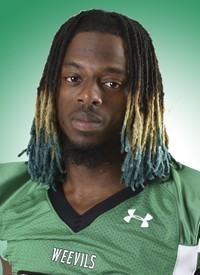 Strengths: Adams is a defensive back that can line up as both a cornerback and as a free safety.  He shows good footwork & play speed to mirror a receiver one-on-one.  As a cornerback, he sticks to a receiver’s hip in man coverage, and can disrupt passes against short & intermediate routes.  In zone coverage as a free safety, he can break on the ball well with good range, especially when he can run down hill to make a play.  He has the size that coaches look for in a cornerback or free safety.  He isn’t afraid to come down, and provide run support.  When he gets his hands on an outside receiver, he’s physical enough to be able to drive them out of bounds.

Weaknesses: While Adams is versatile as a defensive back, he looks to be a bit flat footed at times when lining up as a cornerback in man coverage.  When playing zone coverage as a cornerback against deep routes, he tends to let the receiver get a step on him, and he turns his back to the quarterback.  Despite having good ball skills, he doesn’t have the best hands.  When he comes up to make a tackle against the run, he doesn’t always take the best angles.  His ability to consistently press a receiver at the line of scrimmage will be questioned.  A lack of productivity, along with his level of competition will be looked at closely.

Summary: Andre Adams was a versatile defensive back at the Division II level for the University of Arkansas-Monticello Boll Weevils that any defensive coach can put at cornerback or free safety.  His play speed & footwork allow him to mirror his receiver in one-on-one situations in man coverage as a cornerback.  With good range as a free safety, he can break on the ball well in zone coverage against deep routes & short passes.  He’s willing to provide help in run support.  He can be flat footed while playing man coverage, and he can let a receiver beat him by a step on deep routes, causing him to turn his back to the quarterback.  Against the run, he doesn’t take the best pursuit angles to make a tackle.  As a cornerback at the next level, he needs to show that he can play press coverage, and be able to break on the ball on deep routes without turning his back to the quarterback.  At the pro level, I see him as a free safety due to his range & ball skills.  He also needs to show that he can be productive as well after not putting up big coverage stats throughout his two-year career at the University of Arkansas-Monticello.  I see Adams as an undrafted free agent that any NFL or CFL team could bring in as a training camp invite.  With the right coach who’s willing to work with him, he can become a productive defensive back.