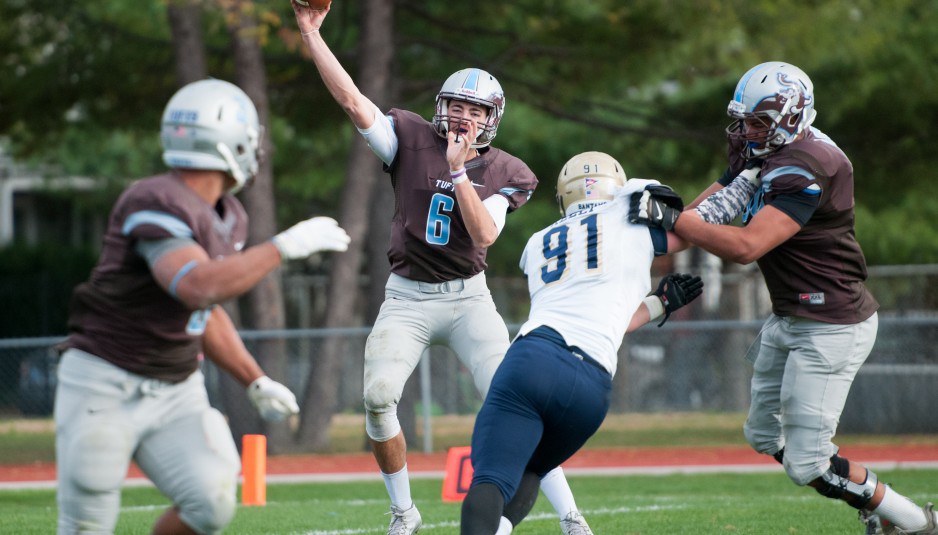 Strengths: Snyder is a QB who has NFL size & frame at 6’4 ¾.”  While in the pocket, he has decent vision when looking downfield, and he is mobile enough to move around to elude pass rushers.  When the pocket breaks down, he has the ability to escape to make throws on the run, or even to tuck the ball away, and run for yards.  In a sense, he becomes a bit of a gunslinger.  He displays great arm strength on all of his passes, especially on deep throws.  He shows good ball placement on intermediate passes, throwing to where only his receivers can get to it.

Weaknesses: While Snyder has decent vision, he tends to stare down his intended target.  In the pocket, he seems to be stiff & not very comfortable when he’s not moving around.  The biggest weakness I see with him is his footwork.  He looks to be a bit flat footed, and he does not step into all his throws.  Despite being able to throw the deep ball, his accuracy on those deep balls needs improvement to the point where he leads his receiver instead of having him stop his route to reel in a pass.  Watching him on film, he took a majority of his snaps while lining up in the shotgun, so his ability to be effective under center will be questioned.  His level of competition and his productivity will be questioned as well.

Summary: Snyder has the qualities that would make him a developmental QB at the pro level.  He has the size & frame that coaches look for in a QB.  He can play & move around in the pocket despite looking stiff & comfortable at times. He keeps his eyes downfield, and places his passes well on short & intermediate routes.  He can turn into a gunslinger when he eludes pass rushers, and throws on the run.  He shows that he can throw the deep ball, even though his deep accuracy needs improvement.  To be successful at the pro level, he has to show that he can line up & play under center, and be productive in a 16+ game season after only playing 8 game seasons for the Tufts University Jumbos at the Division III level.  With the NFL Draft getting closer, I see Snyder as an undrafted free agent who could be brought in as an invite to a team’s rookie minicamp, or training camp.