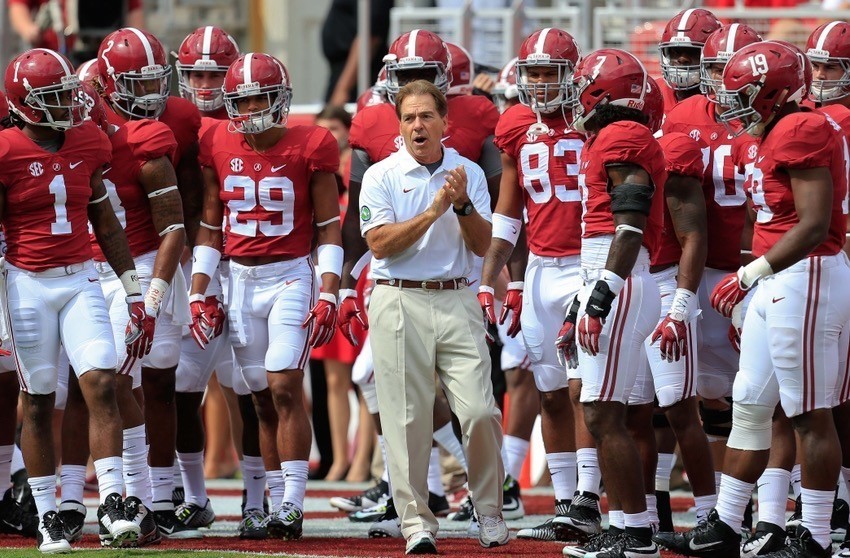 As the Draft mocks are being made and many assumptions are put in stone, we all must remember to “Expect the unexpected”. Many shocking things happen in the Draft that are impossible to predict. Laremy Tunsil dropping, Myles Jack dropping, and Eli Apple’s crazy jump. These predictions do not represent my thoughts on what will happen, but more like scenarios that could happen that are unexpected.

There will be more Alabama players drafted in the first two rounds than QB’s in the whole draft:

This year’s class has been classified as weak QB class from the beginning, and that has held true with a very shallow class. After taking a closer look at NFL teams, it seems like there are less teams with QB needs. This FA class also has a few QB’s remaining such as Jay Cutler and Colin Kaepernick. Alabama is highlighted by prospects like Reuben Foster, Jonathan Allen, and O.J Howard. The class also has secondary players like Ryan Anderson, Tim Williams, and Eddie Jackson. This is an unlikely scenario because Quarterback is still the most important position on the field and teams are bound to take them.

No QB’s Drafted in the first 10 picks:

This year’s class has some of the most talented defensive players in recent memory and every team in the top 10 has defensive issues. The main reason I make this prediction is that the 3 teams I find have a QB need are most likely leaning towards not drafting one. The 49ers signed free agents Brian Hoyer and Matt Barkley who both showed success last year. This is also a secondary which struggles mightily and would benefit greatly from the addition of a guy like Lattimore or Adams. The Jets always seem to take a defensive player, and they have already invested a 2nd round pick on Christian Hackenburg. The Bills decided to not trade Taylor and I do believe he is a viable QB, they are also not to far away from making a push so adding an immediate contributor is the best decision.

Four WR’S drafted in the first round:

The importance of the WR was reiterated this year with ¾ final teams having an elite WR. This year’s class has WR’s of all different types fitting all different schemes. The four WR’s I think could go in the first are Williams, Davis, Ross, and Henderson. All these receivers have special traits which separate themselves from each other and appeal to different teams. I would consider this rather bold because in most mocks I have seen there have not been four WR’s taken

Even after losing guys last year like Eli Apple and Von Bell, the Buckeyes are back at it again. This secondary is viewed as the best in my opinion, which means something with such talented DB’s in the class. We all knew about Malik Hooker and Lattimore, but Gareon Conley has been a late riser getting a lot of top 20 buzz. Almost every if not every team in the top 10 has a DB need, so it would not shock me if these three talented players were getting the call early.

The three Gators I’m referring to are Jalen Tabor, Quincy Wilson, and Jarrad Davis. All these guys have similar grades in my book and across the scouting community. The range where I can see this happening is in the back half of the first round. This prediction is very much a shot in the dark, but if everything falls right this could be a very possible and strange scenario.

No Offensive Tackles drafted in the first 15 picks:

If this were to happen it would be the first time since 1958 (via Greg Auman). This might be the most likely of the predictions I have made due to the weakness of the class. In my opinion this prediction hinges on one team, the Indianapolis Colts. The Colts coincidentally hold the 15th pick, and I know rookie GM Chris Ballard is thinking about going that route, with the very evident struggles the Colts have had keeping Luck upright. Like I have said before this would be the first time since 1958 so you bet it’s bold.

By my count last year Goodell did not miss pronounce any name, but I am confident this year he will return to his old habits. Since Goodell famously said “Marcus Marioto” his mispronunciation of draft picks has been added to the list on why everybody hates Goodell. With names like Takkarist, Budda, Gareon, Haason, and Melifonwu, I doubt that Goodell will get through this one cleanly.