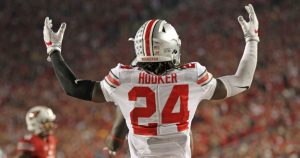 This class is filled with corner backs and safeties, so it occurred to me to write this article talking about the top-5 secondary’s in this draft class. I hope you enjoy and please comment.

The Buckeyes are riddled with NFL talent in their secondary, even after loosing Eli Apple and Von Bell to the NFL. Their secondary is led by my #2 safety Malik Hooker. Hooker is an excellent player. His ball skills, range, and football smarts give him a 1st round grade. At CB there is not much of a drop off in Marshon Lattimore who has been rising up draft boards in the last month. Lattimore is my #2 CB. He has great coverage skills, great tackling, and has good ball skills as well. Lattimore also has an easy 1st round grade. Gareon Conley is the 3rd part of this OSU secondary, the most impressive trait of his might be the ball skills which truly makes him a special player. Conley has a 2nd round grade in my book. All these players have excellent ball skills and will be starters in the NFL for years to come.

The Gators last year just like the Buckeyes lost a great corner in Vernon Hargreaves and a safety Keanu Neal. Like the Buckeyes this year’s class may be even better highlighted by Jalen Tabor and Quincy Wilson. These corners both have 1st round grades, Tabor #1 in my rankings and Wilson #3. Tabor reminds me of Chiefs CB Marcus Peters they are both 6 feet and have the same body frame. Tabor like Peters has great ball skills but has the tendency of being burned over pursuing the ball. Wilson is a big CB who also has a knack of finding the ball but his coverage skills are lacking, he usually gets beat on slants or posts and might not have the short-field quickness to match up with smaller receivers at the next level. Marcus Maye is a nice player, he has great range and can tackle but he lacks in coverage and is riddled with injury concerns. He has a 3rd round grade if healthy. The opinion on Wilson and Tabor is inconsistent 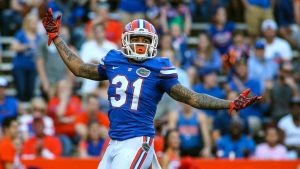 among the scouting community but I am confident these two will have succceful NFL careers.

The Huskies had a somewhat of a Cinderella season ending up in the CFP as the 4th seed. The Huskies had a very talented secondary including, Sidney Jones, Budda Baker, and Kevin King. I have a 2nd round grade on all three players. Sidney Jones is talented corner that does not get burned much but does give up a lot of shorter passes such as slants and comeback routes. His ball skills are not as good as other corners in the class. Kevin King stands apart at 6,3. King is one of my favorite prospects due to his very high ceiling. King is usually beat when in press coverage but when he is not in press he is a very solid corner. His size, speed, and tackling remind me of Richard Sherman. Budda Baker is very high on many people’s boards but I’m not as high on him as others. Baker is a fast rangy safety with good tackling, but his size is very concerning to me. Baker is a lot like Marcus Maye with more production and without the injury concerns. Baker is listed at 5,10 is why he most likely won’t go in the first round.

LSU’s team is highlighted by Jamal Adams who is regarded as a top 3 player in this draft, and my #1 safety. Adams is the full package; the way I describe him, a LB playing safety. Adams is a great tackler but also has the range and ball skills of a safety. Tre’Davious White at CB makes this vey good secondary. I have a second round grade on White, there is not a specific weak spot you can point to in his game, but his hips are tight, which leads to polished receivers to beat him which will lead to a big problem in the NFL. With the right coaching, White can be a very good corner at the next level.

Bama had one of the best defenses in College Football which was highlighted by players in the front 7 like, Allen, Williams, Foster, and Anderson. Don’t count out the secondary which is led by Marlon Humphrey and Eddie Jackson. Humphrey received a lot of praise in December but since then it has been down-hill. Humphrey has his moments were he looks like a first rounder but is very inconsistent and get’s beat often, he has a second round grade in my book. Eddie Jackson is very good player but did not finish the year due to injury. Jackson plays a lot like Adams but is not as explosive and does not have the production. Jackson is a mid-round guy but I’m confident if his medicals check-out he is worth a third round pick.