The Chosen One: The Derek Carr Story

The Chosen One: The Derek Carr Story

Derek Carr was born in Fresno, California on March 28, 1991 where he began his school life. His older brother David was the star quarterback and decided to attend Fresno State University. His family moved to Sugar Land, Texas after his brother was drafted first overall to the Houston Texans.

Carr played high school football at Sugar Land Clements high school. Carr played on the freshman team and in his sophomore season became the backup quarterback. While Carr didn’t prepare very well, he was forced into the starter position after a preseason injury. 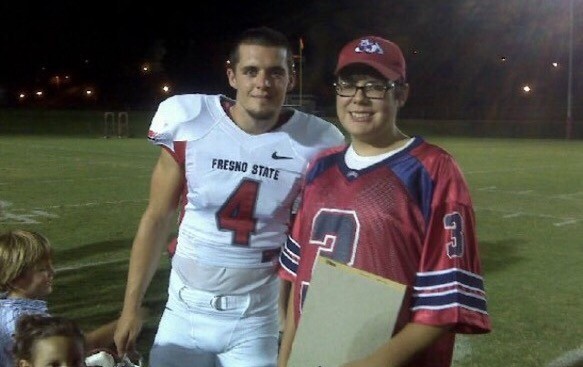 Carr, like his brother, attended Fresno State and became the star quarterback. Carr was redshirted his freshman year then became the starter his sophomore season.

In Carr’s senior season he showed he could be an NFL player. Carr won the Sammy Baugh trophy for best college football passer and finished eighth in Heisman voting.

Carr got married while in college and his first son was born with his intestines tied up. This led to three surgeries but his son is now fine.

With the fifth pick in the NFL draft the Raiders selected small school edge rusher Khalil Mack to be the face of their defence. In the second round the Raiders were searching for a long-term solution at quarterback. In the first round three quarterbacks were taken, University of Central Florida’s Blake Bortles, Texas A&M’s Johnny Manziel, and University of Louisville’s Teddy Bridgewater. Luckily for the Raiders, the quarterback they graded best was still on the board in round two.

Three teams picked before the Raiders and only one, the Houston Texans had a need at quarterback. The Texans passed on Carr because of his brother, David, who they selected with the first pick of the 2002 NFL Draft and was a bust. The Raiders seized the opportunity and selected their future at quarterback. 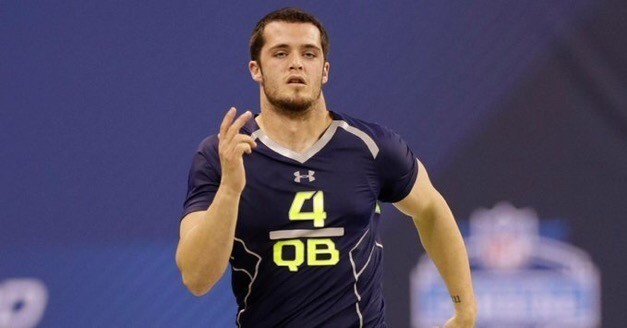 Carr throughout his life modeled his game after other great quarterbacks. From Tom Brady to Dan Marino, Carr has learned something from watching other quarterbacks. There is one quarterback in particular which Carr was inspired by the most.

Brett Farve was Carr’s favorite quarterback by the way which he played the game. Carr described him as always having fun and he wants to play football the same way. Carr, who is number four, took inspiration for it from Farve.

Carr in comparison to other 2014 draft quarterbacks

Throughout the first 3 years of his career, Carr has shown to be a better quarterback than all of his earlier taken counterparts. The only stat Carr doesn’t lead in is yards however, for Bortles his yards don’t matter when he constantly cost his team games.

The Cleveland Browns cut Manziel in the 2016 offseason after multiple alcohol and partying “scandals”. Even when Manziel was on the field, he was outperformed by every other 2014 Draft quarterback.

Of all the 2014 quarterbacks, Bridgewater is the closest to Carr. Him missing the entire 2016 season negatively affected his stats but even then his is only a game manager. 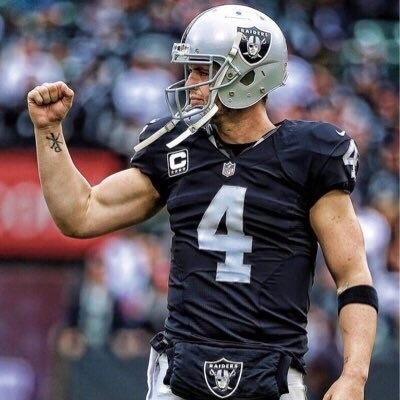 After an average rookie season from Carr, the Raiders knew they needed to provide an environment where Carr could thrive and become a top quarterback. They started by hiring coach Jack Del Rio, who was the head coach for the Jacksonville Jaguars from 2003-2008. He also was the Denver Broncos defensive coordinator from 2012-2014. The biggest additions to the team for Carr would come in free agency and the 2015 NFL draft.

In free agency the Raiders would sign long-time San Francisco 49er Michael Crabtree to a one year deal. The Raiders passed on Crabtree for speed receiver Darrius Heyward-Bey in the 2009 NFL Draft who was a bust. They also signed center Rodney Hudson from the rival Kansas City Chiefs.

The investment in these players would pay off as the Raiders improved to 7-9. Carr would have 3,987 yards passing, 32 touchdowns, 13 interceptions and have the second most touchdowns through the first two years of their career. The only person with more is Hall of Famer Dan Marino. Cooper would have 72 receptions for 1,070 yards and 6 touchdowns.

With the 2015 draft over, the Raiders looked toward the season. While looked at as a rebuild year, the Raider felt differently. While the “experts” predicted the Raiders to go 4-12, 3-13, and even 2-12, the Raider kept working to build on their previous year.

After an embarrassing blow to the hands on the Bengals, the Raiders turned their season around and went 7-9. While they didn’t make the playoffs, they were competitive every game. Derek Carr along with Cooper, Mack, running back Latavius Murray, and safety Charles Woodson.

Carr came into the 2016 season as just another quarterback. People thought the Raiders would make the playoffs, but didn’t expect the jump they got. The Raiders moved from 7-9 to 12-4 and would have made a playoff run had Carr not been hurt.

The whole entire year Carr was a MVP candidate. He led the league in game winning drives by a quarterback and even after he broke his pinky he continued to play at a high level. It wasn’t until Carr broke his fibula in week 16 that he stopped playing.For the Raiders and Carr the future looks bright.

This piece was put together by Dylan Lloyd of Draft Engineers.