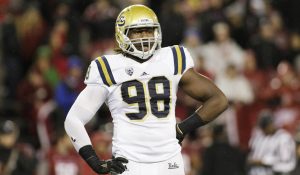 Pros: Speed, and his speed kills offensive lineman. Shows a lot of athleticism and fights throughout the play. Amazing closing speed. Explosive off the line and a quick burst of speed. Has good balance and can bend and dip. Arms have the ability to keep defenders away from disengaging from him. I actually want to see how long his arms are because they seem longer than what the should be for someone his size. Active hands. Can read and diagnose plays as they develop. Has shown pass rushing moves, most notable the swim move. Has a knack for getting hands on the football, whether it’s from the quarterback’s hands or batting them down. Has a ton of upside as he’s gotten better as time goes on.

Cons: Doesn’t exactly have the body for a 4-3 defensive end and may be better suited as a pass rushing 3-4 outside linebacker. Has a slim build for lower part of his body. Will want to add more weight to transition into NFL. Must work on strength and pad level, as he can be taken out of plays, but his speed makes up for it by playing until the whistle. Sometimes has arm tackles, which isn’t something you want from a defensive end. Struggles as a run defender. Raw player with upside, but still raw.

Overall: A pure pass rusher who will only get better as time goes on. He has a great motor and doesn’t take plays off. At the combine, he’s going to blow up and many of us are going to be talking about his speed. His strength is what needs the most work, but he has shown pass rushing techniques rather than just relying on pure speed. There’s a lot to like about this kid.