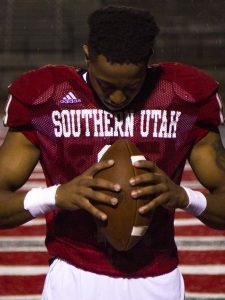 Southern Utah defensive back Josh Thornton is special. He is a big time play maker

We are learning that defensive back Josh Thornton of Southern Utah worked out for the Cincinnati Bengals recently.

Thornton played in the NFLPA All Star Game in January and was regarded as a standout player. Thornton had the chance to practice and play in front of NFL scouts and be interviewed by team executives.

According to Thornton, NFL teams have told him he is potentially a late-round draft pick. They like his speed and his cover ability but want to see more physicality.

Thornton worked out with the Cincinnati Bengals on March 9th. Kevin Coyle the Bengals secondary coach worked him out. I would not be surprised if Thornton was drafted. He is a good player.  We did an interview with him earlier this year and Thornton compared his play to Ronald Darby.