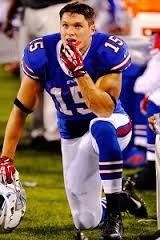 Any team can sign a player that is tendered, just like last year when the Dolphins signed running back C.J. Anderson to a huge deal.  When the player signs the new deal his original team has a set time limit to sign the player to the same contract or higher.  If the team decides to not match then the team is given the compensation of which the player was tendered.

For example, last year the Buffalo Bills tendered Chris Hogan to the lowest possible tender which was an original round tender.  Since Hogan was an undrafted free agent, when the Patriots signed him to an offer sheet the Bills could not match the team missed out on a draft pick.  If the Bills would have given him a second round tender which is only about 700 thousand more dollars, the team could have kept their player or received a 2nd round pick in exchange for Hogan.