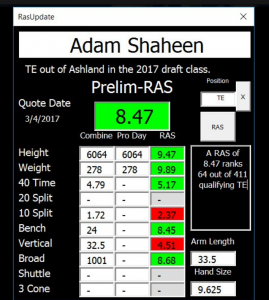 Some years ago, I was talking about the draft with my mother, who was a rabid Pittsburgh Steelers fan at the time (Less so with Polamalu gone). With the NFL combine having just concluded I mentioned a few prospects and how they measured. After I mentioned a player who had ran a 4.64 being very fast, she got confused. A few minutes earlier, I had mentioned a player who ran the same time and mentioned how slow that was and now I was talking about a different player being fast. The difference of course was the position they played. A defensive end running a 4.64 is impressive, it’s universally considered bad for a corner to run that speed. There had to be a better way to explain a player’s measurements within the context of their position group in a simple manner, so I began developing what is now known as the Relative Athletic Score, or RAS.

At its most basic, RAS takes individual player measurements, height, 40 time, etc., and places it on an easy to understand scale of 0 to 10. Those scores are averaged and then a final 0 to 10 scale is created. It allowed me to take almost 20 years of data and score players relative to their position and then use that data to compare players who have found NFL success and see what traits correlate most closely success. I found very quickly that individual measurements mattered little in a bubble. The whole picture that RAS helps paint can identify players who are more likely to succeed and those who are not.

Where this method becomes useful is looking at draft prospects in historical context. I recently looked at both pro bowls and sack numbers for pass rushers and used RAS to see what trends I could find. I found that out of 41 pro bowl defensive ends since 1999 who qualified for this metric a whopping 32 measured above average (5.00) for RAS. Taking it further, 22 of them…more than half…rated 8.00 or above for RAS. That is considered elite athleticism and it is clear that elite athletes win as pass rushers. The trend was similarly clear for defensive tackles, with 24 out of 28 rating above average.

@RDotDeuce There is a out a 5:1 correlation for pro bowl DT and high #RAS. It was similarly high for 5+ sacks.

Pro bowls aren’t always the best indicator of NFL success, however, as we all know some people get snubbed and some get in that don’t deserve it every year. Using traditional stats like sacks, that trend remains nearly the same. From 2010 to 2016, 63 defensive ends, defensive tackles, and linebackers reached 10 or more sacks in at least one of those 7 seasons. Of those, 51 rated above average and again over half (32) rated above 8.00.

The reason I think RAS paints such a clear picture is that it doesn’t display relative athleticism on a bell curve, what’s referred to as normal distribution, but in pretty close to a straight line. The best way I’ve seen this concept described was recently about John Ross on the Draft Dudes podcast. How many more cornerbacks are you going to outrun if you run a 4.22 instead of a 4.3? That answer isn’t many if any at all, and RAS illustrates that a lot better than taking just the time itself. There’s a big difference between 4.22 and 4.3, but in relative terms it’s the difference between a 10.00 and a 9.98.

It can also help explain just how strong a draft class is at certain positions. Take tight end in 2017 for example. Billed as one of the best tight end classes in decades, this class has so far displayed the elite athleticism that teams love at that position. In fact, historically speaking, no tight end has been drafted in the first round since 1999 that didn’t measure above average for RAS. At the time of this writing with only a small amount of pro days completed, seven tight ends from this class (led by Bucky Hodges but including O.J. Howard, David Njoku, and small schooler Adam Shaheen) rate in that elite 8.00 and above range with another four who might jump above it once 10 and 20 yard splits are released. To put that in context, there were only 5 in all of 2016 and 4 in 2015.

Adam Shaheen and Eric Saubert are two small school studs who many expected would show out. They have so far! #RAS pic.twitter.com/mIkFPDYKDD

There are, of course, outliers. The QB position for instance shows no correlation between RAS and NFL success, which shouldn’t really surprise anyone. Despite guard and tackle showing a huge correlation to success, there doesn’t seem to be any with the center position. The only surprising position for me was safety, which doesn’t appear to have a correlation at all. That’s a position you’d think would rely on a lot of things we measure, such as speed and explosiveness, but it doesn’t seem to correlate through any statistical measure. That’s further illustrated by the fact that neither Earl Thomas nor Kam Chancellor of the Seattle Seahawks, considered one of the best safety tandems in the NFL, measured above average. Antonio Brown, the NFL’s top receiver, measured a paltry 1.55 out of 10 while another Seahawks standout, Michael Bennett, came in at only 1.23. That doesn’t take away from the fact that players like Calvin Johnson, J.J. Watt, and Adrian Peterson all measured in elite range for their positions and that most players who find success measure out well. It’s all about looking at trends, probability. While it’s possible a player can find NFL success while measuring poorly? Sure. Is it likely? Not so much. The aforementioned Antonio Brown was a 6th round pick out of Central Michigan, while Michael Bennett went undrafted.

While there is some correlation with RAS and NFL success, it has been shown to have a massive correlation with the NFL draft. As mentioned, no tight ends drafted in the 1st round had a RAS below average and other positions have shown similar trends. Of the 456 first round draft picks from 1999-2016 who qualified for RAS, just over 80% of them measured above average for RAS. Even more telling, over 47% of first round draft picks rated 8.00 or higher for RAS, the elite range. Only 32 first round picks over that span measured under 3.00 RAS, less than 7%. Even at positions like quarterback, which have no correlation to success, still have a large correlation to draft stock.