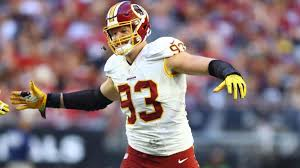 Just when the Redskins think  they are moving in the right direction a bump in the road throws off their steering.  Trent Murphy the teams pass rusher is facing a four game suspension to start the 2017 NFL league year for performance-enhancing substances according to the Washington Post.

A second-round draft pick out of Stanford in 2014, Murphy went from a starter to a backup but thrived as a situational pass rusher in 2016, recording nine sacks and three forced fumbles.

Those 9 sacks will be missed dearly if he cannot win his appeal.