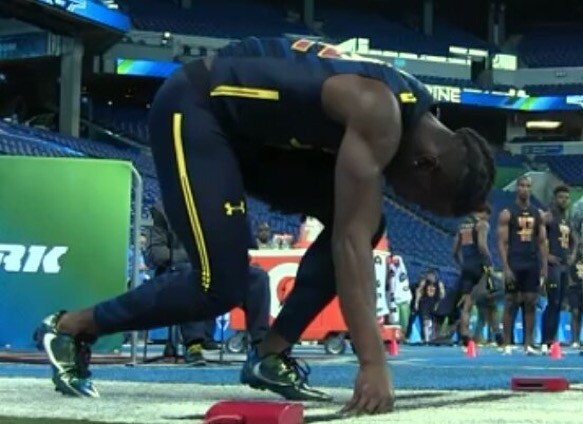 On day 2 of the 2017 Scouting Combine we saw something truly amazing. John Ross broke Chris Johnson’s 40-yard dash time by running a 4.22 and putting the twitter world on fire. We all knew how talented Ross was, but there is just something about that 4.22 on the screen that makes you excited. After it became official there was buzz about certain scouts seeing Ross as an elite prospect and potential star. Now, this might be recency bias but Ross is flying up boards and here are three locations where I can realistically see him getting drafted. Pick 17 Redskins: The Redskins did take a WR last year in the first round drafting Josh Doctson, but Doctson had a hard time getting on the field as he was plagued by injury. The Redskins are a pass-first team and with key receivers like DeSean Jackson, Pierre Garçon, and Vernon Davis leaving, Kirk Cousins could use a speedy receiver who has a very complete route-tree.

Pick 18 Titans: If the Titans don’t select either Corey Davis or Mike Williams with their first pick, John Ross would be a great option at 18. The Titans took a big step last year by almost making the playoffs, but Mariota needs more playmakers on the offense and that’s what John Ross is. The Titans have a strong OL and have a great TE in Delanie Walker, but adding a player like John Ross can expand the offense and make this team a legit playoff contender.

Pick 19 Buccaneers: The Bucs also made a big step in 2016 with star WR Mike Evans and Jameis Winston. Even though WR might not be the biggest need, another option for Winston could really take this offense to the next level. With a big WR in Evans and a smaller faster receiver in Ross this offense will have opposing defenses scratching their heads for answers.

It was a coincidence that the 3 fits were all in a row but it does makes a lot of sense. When you get to pick 17 the consensus top 2 WR will most likely be taken and the Elite defensive players will have already been selecting, which leaves a very talented receiver who can bolster and add another dimension to an offense.