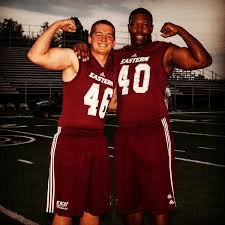 Pat Graffree is a big boy who transferred to EKU from Kentucky. He has a huge frame and is great a stopping the run.

Refereeing little league games that were played on my high school practice field.

My mother because no matter how bad a situation is she never shows a weakness and she keeps me going with word of encouragement. Also, my mother made me go to little league practice at the age of 7 even though I didn’t want to play football at the time but she seen something in me that I didn’t see at the time. I give all the glory to her because she’s my energy kit, I play for her and my family. They keep me going!

I played everything on the defensive line from Defensive End to Defensive Tackle.

No matter where I am at on the football field I’m running to the ball carrier full speed with bad intentions. I can play double teams and I love defeating one on one blocks.

I look at the specific offensive lineman’s: stance (run or pass), how well does he move out of his stance, how good he is with his hands, does he give me any pre-snap indicators on what he is going to do on a specific play, and last but not least the player that have success going against the offensive linemen to see what his weaknesses are.

I don’t really have a specific player but I didn’t have trouble with the Florida’s offensive line my sophomore year on the field at EKU. I was 280lbs. playing Defensive Tackle vs. a SEC offensive line. I didn’t have a good game but it showed me that I needed to gain weight if I wanted to be successful on combo blocks.

Fletcher Cox- I can move for my size, I have grit, always wants to get better on and off the field, versatile, humble,I love the club-rip he uses to get on an edge in the pass rushing game, and his motor never stops.

Moving away from my parents in my hometown (Decatur, AL) in 2010 and moving to Elizabethtown, Kentucky with my cousin Cory Cleveland due to me to me having disciplinary issues at home. Everything happens for a reason. It was hard adjusting to my new live in Kentucky when I was 15 years old but I love the outcomes that came with me moving away from my parents. All District, All State, Best of the Bluegrass, Kentucky Border Bowl, still the only player from my high school football team to sign and play for a SEC football team (UK) before transferring to Eastern Kentucky in the summer of 2013. Last but not least my biggest obstacle has helped me graduate from a 4 year university and has opened many doors for me. I overcame my obstacles by staying in school and playing the game I love football.

I like to listen to music when I’m getting dressed for a game, then I’ll go out and run around on the field to get mentally focused and to loosen my muscles before my position group went out to do pre game drills before a game.

Being versatile at the Defensive Tackle position and being coachable. 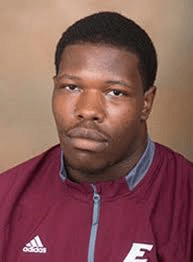 My hand placement at times.

I am a kid from Decatur, Alabama with dreams of being the next Reggie White in the national football league. Nothing has never been giving to me, I’ve worked to earn everything from my varsity letters in high school to my Bachelors degree I’ve earned while being a student athlete at Eastern Kentucky. I went from having 12 tackles total my junior year, a coaching change, and I led the Ohio Valley Conference at my position in tackles with 40 tackles, 3.5 sacks, and 9 TFL’s. Last but not least I wasn’t a starter for Eastern Kentucky until my senior year in 2016 and my productivity showed once I earned my starting spot and earned more reps at Defensive Tackle to make the plays that I made my senior year.

Charles Haley and the Dallas Cowboys

Martin Luther King, Muhammad Ali, and my grandmother Elsie Grace Gray who passed away in 2004.