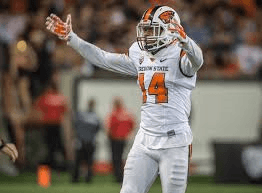 Oregon State defensive back Treston Decoud will meet with the Cowboys

Treston Decoud is one of my favorite players in the 2017 NFL Draft and let’s face it, the big corner from Oregon State has been really increasing his stock since the East/West Shrine game.

After his amazing performance at the E/W Shrine game, he was rewarded with a combine invite. He recently held his pro day where the Colts and Cowboys expressed interest in the physical corner.

Well Decoud met with the Cowboys before his pro day then worked out for them privately afterwards.  He is now scheduled to attend a pre-draft visit with them.