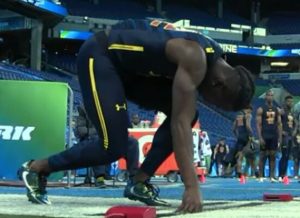 John Ross and Nike pick on Adidas after blazing a 4.22 forty

John Ross broke the record for the fastest forty yard dash since Chris Johnson ran a 4.24 back in 2008.  Adidas had a special going on that if you wore their shoes and broke the record they would give you a private island up to 1 million dollars.

When John Ross everyone was so pumped because he ran a 4.22 forty yard dash.  The problem is he wasn’t wearing the Adidas shoes you had to wear to win an island. So afterwards John Ross posted a picture of the Nike Vapor shoes he wore during the 40 yard dash, and Nike responded by saying this.

On an island all by yourself.

I wonder if Nike will give him a million dollars or at least give him an island….