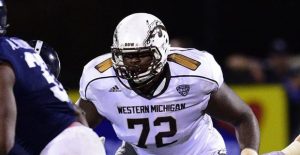 At Western Michigan Taylor Moton did not receive alot of attention from the scouting community. Western Michigan had an amazing year going undefeated, until the last game of the year against Wisconsin in the Cotton Bowl. Everybody began to rave about Corey Davis and the gem they had found in Kalamazoo, but they had forgotten to look a little deeper. Moton’s stock began to rise after an impressive Senior Bowl, and has continued after the combine. I just recently got into Moton’s tape and I was very impressed. 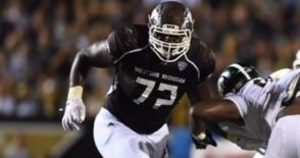 Moton projects to be a day two pick, with first round up-side. Moton’s big frame and good footwork set a very solid base in which NFL teams will be very happy about. Moton might not be the sexy pick, but with a good OL coach who can teach him to use his hands and with some NFL experience, Moton could be one of the best tackles in the NFL. I believe that Moton is a plug and play RT that will just get better with experience. His strength lies in his pass pro but unless they ask him to drive defenders and go to the second level Moton should be just fine in the run game. In my last Scouting Report, I liked Kevin King because of his upside, but with Moton he has such a high floor that makes him a first rounder in my book.

By: Alberto de la Guardia 1018sports – He is a MUST Follow