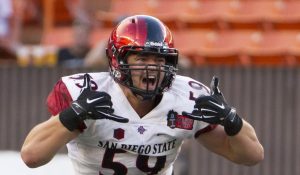 Kyle Kelley is an underrated player with a motor and football I.Q.

Strengths: Kelley is a competitive defensive end who plays with a high motor on a majority of snaps.  He has decent hands that allow him to beat blockers with a rip or swim move in tight spaces.  Once he’s gets into the backfield, he can close quickly to bring down the QB or RB.  On inside runs, he can crash down the line of scrimmage, and chase down the ball carrier.  Against the pass, he uses his hands decently to beat OTs & TEs in pass protection.  He shows that he can line up on the line of scrimmage as a DE in a 9-, 7-, 6-, 5-, and 3-technique.

Weaknesses: On film, Kelley tends to rely on his high motor than athletic ability.  He doesn’t have a lot of explosiveness at the snap of the ball.  He isn’t very flexible as a pass rusher, especially when engaged with an offensive guard.  On outside run plays, he can get tied up to the point where he can’t set the edge.  He’s not quick at shedding blocks on passing play on a consistent basis.  His strength at the point of attack is a question.

Summary: Kelley is a player that lined up in multiple techniques as a DE in San Diego State’s 3-3-5 defense.  He plays with a high motor that allows him to compete to make a play.  While not very strong at the point of attack, he uses his hands to rip & swim pass blockers in order to get to the ball carrier or QB.  He can crash down the line of scrimmage to close in on the RB on inside runs, but doesn’t show that he can set the edge against outside runs.  While he can get to the QB at times, he doesn’t show much flexibility to be able to bend & dip under an OT to beat him outside consistently.  Overall, he doesn’t have the explosiveness that an NFL starter has, but I see him becoming a contributor as a backup on defense that can be brought in as an undrafted free agent for a team that runs a 4-3 defensive scheme.