New Spring Football League has some big names signed up 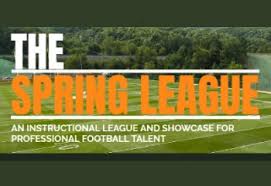 The Spring League will kick off in a few weeks

I have been trying to boost up new leagues left and right because I desperately believe that the NFL needs a developmental league.  Not many have succeeded, but the man running the new Spring League has launched the best plan since the XFL.  Brian Woods is his name, and he is dedicated in getting the NFL to accept his developmental league.  Woods was also over the FXFL that came out last year, and failed miserably.  This year they are doing things a little different though.  According to Pro Football Talk, they have some big names as well.

A new spring league launches next month at The Greenbrier in White Sulphur Springs, West Virginia. Coincidentally, it’s called The Spring League. And it will feature some recognizable names right out of the gates.

Former NFL players Greg Hardy, Kellen Winslow Jr., Brandon Browner, and Ben Tate have committed to the effort, according to a press release from The Spring League. Camp opens on April 5, with a six-game schedule that will be completed before the NFL draft begins.

If Johnny Manziel or Tim Tebow want to play football again, The Spring League is ready for them.

The independent league will debut in April with four teams composed of free agents. They’ll start training April 5 at The Greenbrier Resort in West Virginia, and will play a total of six games there in a three-week span.