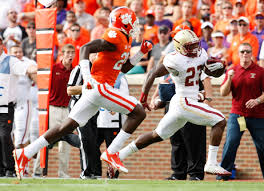 Myles Willis is a beast. I think he maybe the most underrated RB in the draft

I’ve always struggled with foreign language and during the summer of my junior year I took on an accelerated Spanish course that condensed an entire year of Spanish into two months. It was a struggle for everyone and it was truly special to see an entire class come together and organize study sessions and taking time out of my day to meet with the professor during office hours. Truly a mental grind!

Atlanta, Georgia. Conyers, Georgia more specifically if you are familiar with the Metro Atlanta Area

My father is my role model. From day one he always treated me like a man and held me accountable for my actions. He molded me into becoming a respectable and accountable individual, which became extremely valuable qualities during my freshman year when I was fighting for playing time and recognition.

Up until the age of 10 played all sports, baseball, track and soccer. I kept with track until my senior year of high school, but I mainly used the sport for off-season speed training for football.

Growing up I was always the quarterback. At Marist high school I ran the triple option offense and led my team to the semifinals. We loss on a heartbreaking missed field goal, after I led an excellent one minute drill down into field goal position. 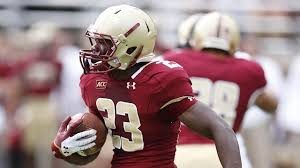 Versatility, I have the speed and quickness to become a quality scat back on the next level, however I always have the vision and understanding of the game to be a viable option in both the run and pass game.

First, I analyze the defensive front and how they adjust to different offensive personnel and shifts. Next, I examine the secondary and how the safeties fit the run game. I loved playing teams like Virginia Tech who always have active safeties who play in the box, if you can anticipate the right cut you will hit your head on the goal post! However, Coach Bud Foster is a legend and defensive mastermind so the home run hits do not come often, always a chess match.

The ACC is home to some of the nation’s most elite athletes. My freshman year I was introduced to one of the most explosive defensive ends in ACC history in Clemson’s Vic Beasley. Their front was very active and aggressive and I found success on a forty-yard touchdown run on a draw play. Beasley and Grady Jarrett got off the ball so fast and I was able to sneak past the line of scrimmage and turn it into a foot race to the end zone. Being an Atlanta Guy I was pumped to see the Falcons pick up Beasley and Jarrett, especially Jarrett because he is from my hometown of Conyers, Georgia.

Jerrick McKinnon. I followed his progression from Sprayberry High School in Georgia, through Georgia Southern and now with the Minnesota Vikings. I actually played him on the scout team for my high school during my freshman year at Marist, helping the team prepare for him in the first round of the playoffs. McKinnon and I share speed and quickness, and he has mastered how to maximize his build to make an impact. We both have the quickness to be valuable change of pace backs.

Going to Marist School presented many challenges for the entire family. My mother picked up a second job and my father worked longer hours to help pay for the education. Seeing my parents sacrifice and work so hard was very tough, and I transformed their struggle into personally motivation. When I started driving I really took my work ethic to the next level. I would drive to different training facilities and to parks to work on my skill. Earning my scholarship to BC was an awesome moment, symbolizing my appreciation for all my parents’ work and sacrifices.

I never set a consistent pre-game ritual. I would always listen to music and jump around and have deep conversations with myself. As game time got closer I would take my headphones off and focus on building the energy in the locker room. Strangely, this past year we would come together listening to Waka Flocka right before we took the field.

My confidence is my biggest strength. I find ways to make plays and often when I look back on the plays in the film room I’m not sure where the plays came from but I just knew something had to be done and I was confident in my ability to make the big play.

Sometimes I struggle with being the best team player. Many times, I would internalize all problems and find time alone to work on my skills but it is even more beneficial to bring others along.

Myles Willis is a player that will put it all on the line for his teammates, coaches and entire organization. Unselfish player that asked to play on special teams to help the team in that phase of the game. Matches the intangible skills you desire in an athlete while also having the skills to be a reliable change of pace back.

Atlanta Falcons Michael Vick days were the best! Vick was so electrifying and it was amazing to see all the children who would get in trouble in park ball by trying to copy his reckless, unorthodox playing style.

Martin Luther King, W.E.B Du Bois and Abraham Lincoln. I admire the works of each of these individuals because they made positive impacts on culture. Culture takes a long time to establish and is incredibly difficult to change but these individuals dedicated their life’s work to improve American culture and society.

For my birthday, my parents bought me a used Toyota Corolla and I’m really looking forward to paying the car off myself. Although the car was needed for transportation to combine training, interviews and networking opportunities, my pride and aspiration for financial independence made it difficult for me to see my parents make the purchase.