Making the Case For Jabrill Peppers 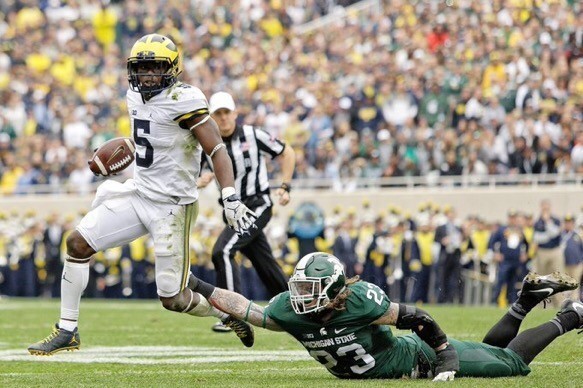 Making the Case For Jabrill Peppers:

Over the summer and through the year everybody was raving about the do it all athlete in Ann Arbor. This summer I spent some time on the campus of the University of Michigan, the excitement for Peppers was nothing like I had seen before. I was hearing comments that he was better than Charles Woodsen, that he is going to be a star in the NFL. It sure did seem like all those comments were going to be true, with highlight plays week after week from punt returns to rushing touchdowns this was a special player. Now everybody was raving as if they were Michigan fans that summer.As we got deeper into the draft process we got declarations from Jamal Adams and Malik Hooker which began to hurt Peppers stock for the simple fact that they were the better players, and I agree. As we began to get deeper and deeper towards mid January safeties like Budda Baker and Obi Melifonwu began to exceed him in mock drafts and big boards. As I sit here in March 5th I cannot believe what is happening in the draft community. Just like last year when everybody was raving about Joey Bosa, but when it came to making mock drafts people were finding excuses and weaknesses that were simply not there, including myself. This year this will not happen.

Jabrill Peppers is knocked by many for not being a good tackler, well I’m sorry but that is false. I have watched four games on Peppers and he is just as good a tackler as anybody. The other big aspect of his game that the scouting community knocks him about is that he does not have a defined position. Guess what, I don’t care. Peppers can honestly do everything he rushes the passer, he is a good tackler, and he can cover RB’s coming out of the backfield and slot receivers. The NFL is messed up, we are raving about Haason Reddick and how talented and versatile he is, and how he can rush the passer and be a linebacker, but when is comes to Peppers it is “weakness” that he can play several positions. Jabrill Peppers is an athlete who plays with his hair on fire that has great range, can tackle, cover, can run the ball, and can be an effective returner. When did it become a disadvantage to be versatile? Peppers is a first rounder whether you realize it now or in a year.