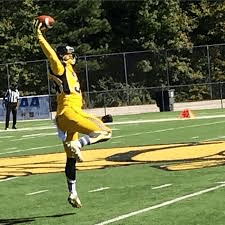 Kristian Wilson is a ball hawk for Bowie State. He will make quarterbacks pay for going his direction

Pros: A nonstop motor and never gives up on the play. Shows the ability to stick to his man on out routes, curls, and comebacks. He’s been with the receiver pretty consistently in those routes and made plays on the ball. He shows a knowledge of what his assignment is and where the ball is going, rather than biting on play fakes. Doesn’t get out of place often and shows great understanding of the offense. Has experience playing special teams. Has a nose for the ball and gets to the ball carrier quickly. Faster than you’d think. Good technique and ability to play the ball.
Cons: Sometimes hesitant to tackle and needs to have a better form. Needs to improve his hips, as he can lose speed when transitioning from back pedaling. Can get out muscled for the ball. Some teams will have questions due to his size. Doesn’t always look back for the ball on deep routes which causes him to play the receiver, which could lead to penalties in the next level. Has an injury history.

Overall: Wilson possesses a great football IQ and it tells while watching his tape.  He’s extremely good against short and intermediate routes, that’s where he really shines. He can read, dissect, and decipher what to do next. He has shown the ability to play different kinds of defense, whether zone or press for example. Questions will come up about his size, but when you watch tape he is consistently with his man no matter their size. He fights for every pass that comes his way. Wilson will have to refine some things of his game, but there’s certainly a lot of things to like when watching his tape.There’s a lot to like about his tape and he’s the type of cornerback who could very well be a late round/UDFA gem.