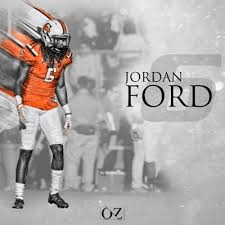 Pros: Very fluid hips that can read the quarterback and react. A willing tackler, doesn’t shy from contact. Does a nice job turning his head around for the ball rather than focus solely on the receiver. Makes a play on the ball when it’s in the air rather than wait and react. Doesn’t get lost in plays and stays focused on his assignment. Mirrors receivers well. Does extremely well when playing off the receiver. Long stride speed. Plays aggressive and keeps that fire going all game long. Doesn’t give up on plays.
Cons: Sometimes too grabby and can put his arm around the receiver which will result in a penalty in the NFL. Not exactly a ball hawk, more likely to knock the ball away. Had a hip injury that lingered as he played for Appalachian State. Must work on footwork and getting in and out of breaks. Occasionally gets to the receiver before the ball does, must do a better job timing those plays.

Overall: While Jordan Ford played cornerback, he may be better suited to play safety in the NFL. He is able to read and diagnose plays, but also makes every catch against him a contested one. Some of his best plays were when he played off of the receiver rather than press. He can play press, but when he plays off the receiver he really shines. Some scouts may be inclined to see if he can play safety. However, Ford does a very good job of always being on his man while playing cornerback. Ford is someone who fights for the ball, and scouts will love that about him.