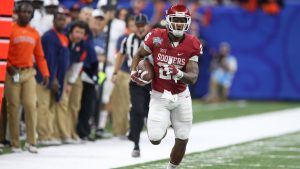 NFL Media’s Aditi Inkhabwala reports that Mixon met with four teams prior to Wednesday’s Pro Day. Mixon is talked about because Mixon entered an Alford plea to a misdemeanor assault charge in October 2014 for punching a woman named Amelia Molitor in the head, causing broken bones in her face which required hospitalization and surgery. The incident happened on July 25, 2014 at Pickleman’s Gourmet Cafe in Norman, on Campus Corner.

Mixon was suspended and removed from the team for the 2014 season after a misdemeanor assault charge in October 2014. He earned playing time his redshirt freshman year, playing in all 12 games with three starts. In his first career game, Mixon had a 76-yard touchdown reception, the longest catch ever by a Sooner freshman running back. He also ran for 27 yards on five carries for an average of 5.4 yards per carry against Akron. During the 2015 regular season, he ran for 749 yards on 110 carries, averaging 6.8 yards. He rushed for seven touchdowns and set his career long carry at 66 yards. He also recorded 25 receptions for 345 yards, averaging 13.8 yards per reception, and four touchdowns.