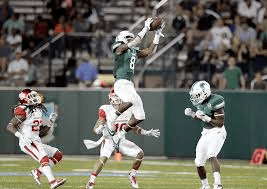 Devon Breaux is a big time playmaker for Tulane.

I’ve cleaned out houses that were damaged in New Orleans From Hurricane Katrina.

My role model is my Mom, because she’s the strongest person I’ve ever met. She have been through a lot and she has always pushed me when things got tough.

I played basketball and Track. I ran track in college also, and was An All-American long Jumper.

I played Quarterback and Cornerback in high school. I got to college & was moved to Wide reciever.

My speed separates me from others because I am able to stretch the field and get behind the defense. That’ll open up things underneath.

I look for keys in the defense that can give us an idea of what coverage their in. Hand signals, where their eyes are. I look for how far the safeties are from the hash marks. And if the corners eyes are on me or the Quarterback. 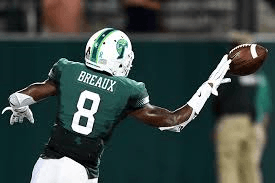 The toughest player I ever faced have to be Between Tavon Young from temple, or William Jackson III, from Houston.

I would have to say Desean Jackson. He has great speed, nice hands, and he can’t stretch the defense.

The biggest obstacle I had to over come was when I got into my junior of my football career. After I had an amazing track career. 2015 conference gold medalist. NCAA all-American. Following spring ball, I was getting asked a lot of questions would I return to the team after a coaching change, would I do track full time and pursue the olympics. The offense changed and I really had a big decision to make. I couldn’t transfer because I had to graduate in the spring. I had to either make a decision to better myself, or make a decision to help the team. I chose to not leave the team. And help my team win in any way I can. I knew that the offense would not be the same and the wide receivers would not see the ball as much but I still remain loyal to my teammates and my brothers. I had to ignore all the outside things and realize what’s important.

I listen to Deion Sanders hall of fame speech a lot before games.

My biggest strength is my routes and speed. Not many guys have speed and precise routes.

I would say that I am not only a football player but I am a leader on and off the field. I will work the hardest and will help the team in any way I can. I’ve never been in any trouble of any kind. I’m not a local leader but I will lead by example. I will compete every day, and I’m very coachable.

My favorite player in the NFL was Michael Crabtree because he run great routes and has good hands.

the first big item I would buy would probably be a house for my mom that I’ve always promised myself I would get her.