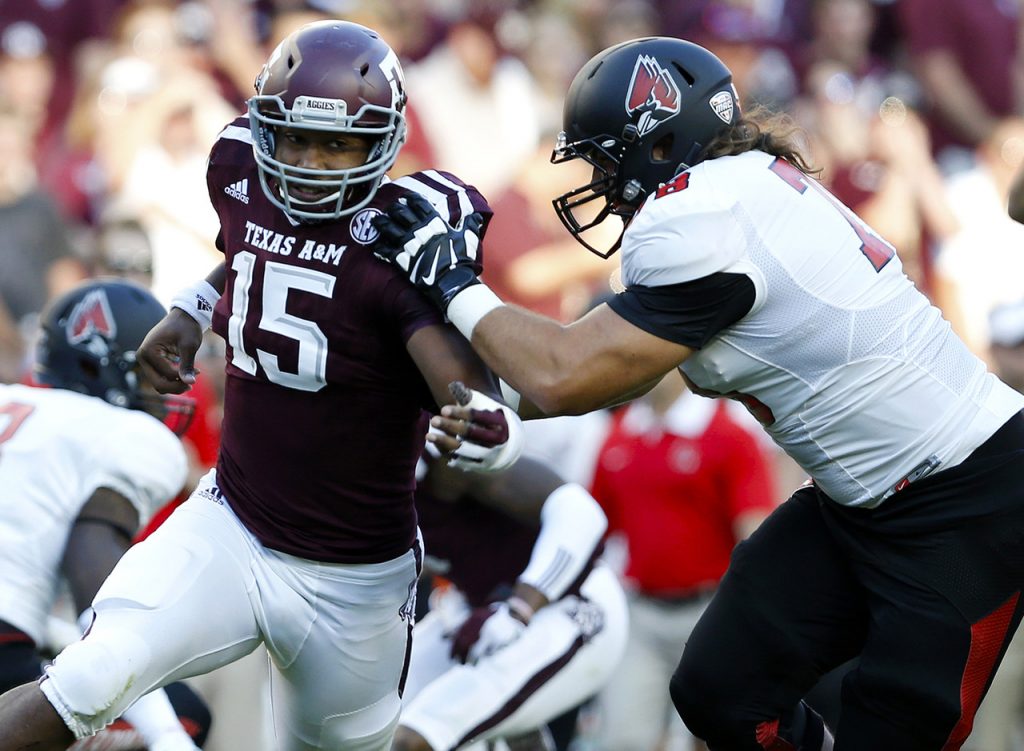 Deep Dive on the top DE’s

In this article I will be giving you my view on this years top DE’s and their different strengths and weaknesses . All of these players are different and approach the game in their own way, but they are all really good at what they do and hope to hear their name called rather early.

Myles Garrett, Texas A&M: Myles Garrett is by far the best player in this class. Garrett has been at the top of every mock draft and big board. Garrett has every tool in the toolbox, he has the biggest variety of pass-rushing moves which he uses at his will whenever he wants and effectively. Most pass rushers either use their speed or power, but Garrett does both. Garrett has shown his ability to use his hands to create leverage and he uses his speed to get the edge on the tackle and create unbalance, which he then uses his power to bulrush his opponent. Even though it is small I kept noticing a fault in Garrett’s game, Garrett dominates lined up to the outside of the tackle, but when he is forced to be in between two lineman such as a guard or tackle, or a tight end or tackle he seems to struggle. For Garret to have success he needs space to use his moves effectively. Besides the one little concern Garrett is a future all-pro and the #1 pick.

Tim Williams, Alabama: Tim Williams is personally one of my favorite players in this class, simply due to his natural abilities to reek havoc on an offense. At Alabama Williams was not on the field as much as most scouts would like, he was primarily used in passing situations. This was a concern to me but what he did with his time on the field just blew me away. Williams is a speed rusher, he wont beat you by putting his hands on you and trying to push you back. Williams will use his tall frame against you combined with lightning quick feet to set up lineman in a way so he can either run by them or use his also quick hands to toss you aside. Williams does not need the power aspect to his game because he is so good at using his hands with a variety of pass rush moves. Williams did struggle with the run game not being able to shed blockers and clog run lanes, but in the right 4-3 system Williams will thrive and be a key part to a defense. Williams has had off the field issues failing many drug tests which in my book is serious, it does not matter what you can do on the field if you can’t even get on it. With Williams I would be willing to take that risk because I truly believe he could be one of the best DE’s in the NFL.

Carl Lawson, Auburn: Lawson might be the exact opposite of Tim Williams yet he is just as effective. Lawson wins with power and smarts. Lawson might be the most polished pass rusher in this draft, he is very technically sound in all of his moves and it shows in the stats and just in the eye test. Lawson approaches a tackle and uses his very strong hands to create a kind of unbalance to the tackle, kind of like a shock. When the tackle is backtracking he loses his leverage that is when the tackle moves on to his second step, when a tackle is unbalanced he extends his arms instead of keeping them at a mid range. When his arms are out he is able to completely beat him with moves like the swim or simply pushing him aside. Part of being a DE is also stopping the run, which he does. He is able to block shed like a DT. He benched 35 reps at the combine and it shows by the way he throws people aside and clogs lanes. Lawson has had injury problems which is always a concern. Even though Lawson is great at using his strength, not being able beat somebody with speed might not sit well with a few NFL teams. 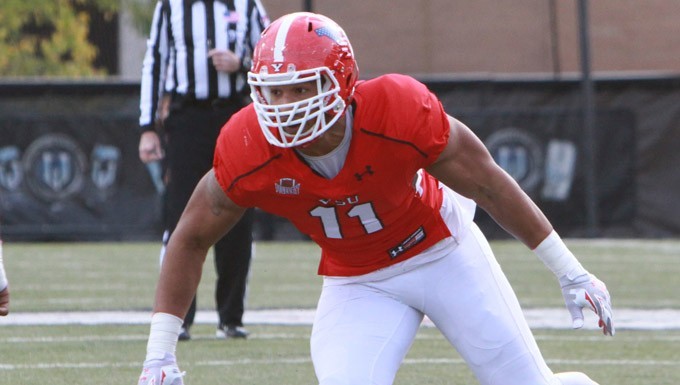 Derek Rivers will be busy the month before the draft.

Derek Rivers, Youngstown State: Rivers has been a late riser in this draft process and for good reason. Derek Rivers has the speed to power combination that is very desired in pass rushers. Rivers shows good speed and excellent hand work. He has a good first step which automatically puts him at an advantage right away. Rivers makes his first step and sets the edge, the tackle tries to recover and will usually forget his footwork and instead of solid choppy steps he will start to run leaving him vulnerable. That’s when Rivers will stop and cut inside. If the tackle keeps his footwork Rivers will will use his quick and powerful hands in combination with a quick shoulder dip burst to blow past the tackle. The last scenario is if the tackle does a good job and keeps Rivers in front of him, Rivers will use his strength to bulrush the tackle and back him up into the QB. All of this sounds great, and it is but the thing is he is doing it against nobody’s. Rivers’s traits definitely show that he is definitely worth a high pick, but he is in my 3rd tier for the soul reason of competition level.

Derek Barnett, Tennessee: Derek Barnett has been one of the best college football players over the last couple of years and for good reason putting up ridiculous sack numbers. There is a difference between being a good college players and it translating to the NFL. The key to Barnett’s success is his shoulder dip. When you look at Barnett and his body type you wouldn’t think he would beat you with quickness but that’s exactly what he does. Barnett is very good at anticipating the snap, and once the ball is snapped Barnett has already gotten parallel to the tackle, after that he is able to dip his shoulder and sneak by the tackle. This is no typical move; Barnett has learned to perfect this move which is something very scary to offenses. My problem with Barnett is that he lacks variety in pass rushing moves. One of the most important traits I look for in a DE is how many ways he can beat you. In Barnett’s case it’s only one. Even though the shoulder dip is great, the typical NFL OT wont have a tough time picking up on it and since he does not have any secondary moves. For Barnett to have success he will need to develop secondary moves, if he does he will be very successful in the NFL.

Taco Charlton: Taco Charlton besides having the best name in the draft was one of the most disruptive pass rushers in all of college football. Taco is a tall and powerful pass rusher, who knows how to use his gift well. The gift I am talking about is that nasty spin move. When you have a a guy that is 6’6 and can spin you out of your shoes, well that is some dangerous combination. The reason for Charlton being in the 3rd tier is his speed, inconsistency, and lack of variation. Charlton ran a disappointing 4.92, which really surprised me. Charlton has his moments where he dominates but most of the game he does not seem to be a factor, not usually in the backfield. As you have noticed, I like DE’s with a variety of moves which is something Taco does not show much of. Charlton has shown the ability of using his hands to set the edge and beat a tackle but does not do it as often for it to be a big factor. Charlton is a big guy with a specialty move in his spin move, if he is able to use his hands more and develop secondary move he will be one of the more dominant player in the NFL.