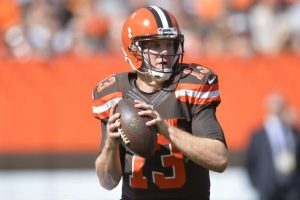 According to Adam Schefter of ESPN, former Browns (and a lot of other teams) quarterback Josh McCown is visiting the Cowboys today.

The 37-year-old McCown is a trusted backup, who started 11 games for the Browns the last two years.

He was drafted by the Arizona Cardinals in the third round of the 2002 NFL Draft. He played college football at SMU and Sam Houston State. McCown has also played for the Detroit Lions, Oakland Raiders, Miami Dolphins, Carolina Panthers, Hartford Colonials, San Francisco 49ers, Chicago Bears, Tampa Bay Buccaneers and Cleveland Browns. He is the older brother of fellow NFL quarterback Luke McCown and younger brother of former Texas A&M quarterback Randy McCown.