UTC OL Corey Levin has worked out for Falcons; Another visit this week 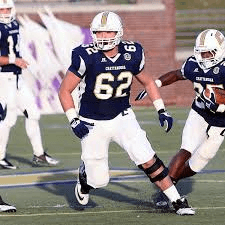 University of Tennessee Chattanooga offensive lineman Corey Levin has been turning the heads of NFL scouts.  The big and versatile offensive lineman has worked out with the Atlanta Falcons already and he will work out for the Eagles on Thursday of this week.

We completed an interview with Corey earlier this year, in which you can read here.

Levin is a Three-time All-American and two-time winner of the Southern Conference’s Jacobs Blocking Award. He played both guard and tackle and started 51 games over his career, including the final 45 in a row. NFLDraftScout.com has Levin rated as the 17th best guard in the draft and projects that he will be selected in the seventh round or go undrafted. He is also a Georgia native.