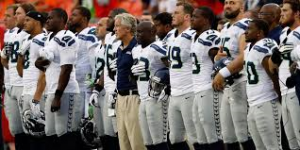 The Seattle Seahawks only have two quarterbacks on their roster.  Russell Wilson, and undrafted rookie Trevone Boykin.  Boykin looked good last year during pre-season, but he ran into some trouble this past week.

Boykin was arrested after he was a passenger in a car accident that ran into a building and injured 8 people. The Seahawks are very upset with the second year gunslinger, and after he tweeted out an odd tweet, it makes you wonder if the Seahawks may look to add a veteran to back-up Russell.

According to a Fox 4 News report, a woman driving the vehicle hit four people on a sidewalk and injured a worker inside the bar when her vehicle crashed. Boykin, who was listed on the police report as a passenger, was arrested on related drug charges and public intoxication.

None of the people hit in the incident were seriously injured. The report did not indicate what drug was in Boykin’s possession, but we have learned he had a bag of marijuana.

Boykin’s tweet said “Full Story” with nothing attached to it.  Many viewed the tweet as a shot at the media, but it definitely did not help his case. Boykin is in hot water right now with the Seahawks, and with Richard Sherman’s comments on Colin Kaepernick this past week, I wonder if the Seahawks would be willing to kick the tires on Kaep?

“I’m sure he is,” Sherman said. “It’s difficult to see because he’s played at such a high level, and you see guys, quarterbacks, who have never played at a high level being signed by teams. So it’s difficult to understand. Obviously he’s going to be in a backup role at this point. But you see quarterbacks, there was a year Matt Schaub had a pretty rough year and got signed the next year. So it has nothing to do with football. You can see that. They signed guys who have had off years before.”

“You don’t have 32 starting-level quarterbacks in this league,” Sherman said. “You have about eight elites, and then you have the rest of the league. You have about eight, nine elite quarterbacks. You have two or three who have the potential to be elite. And then you have the rest of the teams. So he could play and start on a ton of teams in this league. He would be a starter on probably 20 of the teams in this league. But you’re telling me that you’re going to let other guys, you’re going to pick up some of these other guys and tell me that they’re starters?”

This move makes sense to me folks, I would not be surprised if the Seahawks do end up signing him.

Seahawks fans, would you want him on your team?