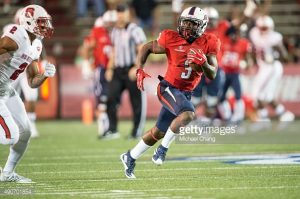 Christopher Lewis is a speedster who is a deep ball threat. (Photo from Getty Images)

While I was training in Arizona I had the opportunity to volunteer to share my knowledge of the game with high school football players at Elevates  football camp. Held by Chad Johnson the Chaplain for the Pittsburg Steeler’s and LA Dodgers. Being able to help the next generation of the game means a lot to me because many of them grew up the same way I did. I am a living testament that you can do anything you want to do as long as you set your mind to it.

I ran track up until high school.

I played running back and cornerback up until high school.

My love for the game is like no other, I’m very passionate about what I do. I want to be the best at everything I do. Never will you see me settle for less. My killer instinct takes my game to another level. I use my speed and route running ability to separate me from others at my position.

I always focus on the guy who will be guarding me. I study what kind of defender he is against other WR’s of my type. I pay close attention to different stances/techniques , signals communicated in the secondary for coverages.

My grandma’s cancer, it tested my mind, body and soul. That was probably the toughest player I ever had to face. It showed me how to be strong , keep my faith and how to compete with my toughest opponent. 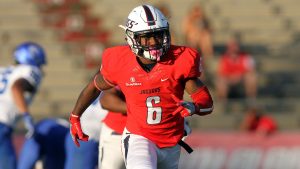 Doug Baldwin, we are both game changers, physicality, speed, route running and just being a player maker really says it all.

Showing I belong playing football at high levels. Most of my life I was one of those guys over looked and underrated until I proved a lot of people wrong. I think about that every time I step on any field. I play with a chip on my shoulder every day. I developed a passion and love for the game and told myself I’ll never let no one tell me what I can do as long as I believe in me.

I don’t have any special ritual is just sit back and visualize making that big play to change the game.

Catching balls inside the hashes

My love ones not here with me today Grandma, Granddad and best friend

My mom a house and car of her dreams.