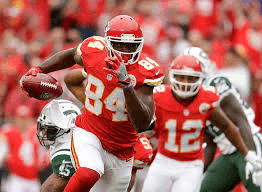 Kansas City Chiefs tight end Demetrius Harris was arrested Tuesday afternoon and charged with suspicion of felony possession of marijuana, according to the Kansas City Star.

“He was a passenger in a vehicle that was stopped for a traffic violation,” Sgt. Bill Lowe told The Star. “The trooper recognized the odor of marijuana, and marijuana was located in his possession.”

Harris was signed by the Kansas City Chiefs after going undrafted in the 2013 NFL Draft.[