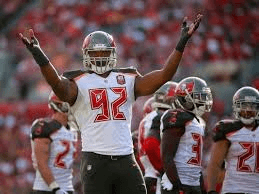 William Gholston has been re-signed by the Tampa Bay Buccaneers

The Tampa Bay Buccaneers are keeping another pass rusher. According to Adam Caplan of ESPN the Buccaneers and DE William Gholston have agreed to terms on a new contract.

He played college football at Michigan State, and was drafted by the Buccaneers in the fourth round of the 2013 NFL Draft.

He finished his rookie season in 2013 as a rotational playing earning 30 combined tackles (14 solo) and 2 quarterback sacks.

In 2015, he became the teams starter at left end for the defensive line when an injury to Adrian Clayborn put Clayborn on the IR list ending his season. He eventually lost the starting job to waiver wire pick up, Jacquies Smith and was relegated to rotational duties for the remainder of the 2014 season. He finished the year with 41 combined tackles (27 solo) and 2 quarterback sacks.

Gholston played in all 16 games while starting 11 in 2015. He amassed 67 tackles, 3 sacks and a forced fumble from his defensive end position.

Gholston signed a five year deal worth up to 37.5 million dollars.