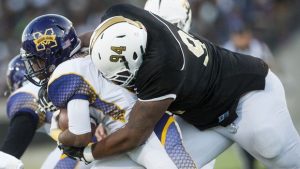 Roderick Henderson is a mammoth of a human being. He is a true run stuffer

Roderick Henderson aka Ghost is not a little man.  The massive pass rusher has been really flying up draft boards since his amazing performance at the NFLPA game.

The, 6’2 350 pound defensive run stuffer had a wonderful pro day. We completed an interview with Henderson on Draft Diamonds recently.

The Big man compares his play to that of Vince Wilfork. The Tennessee Titans know a little bit about Wilfork since he played in their division. Well last week the Titans worked out Henderson to get a better feel for the massive defensive lineman. He was at Southern Mississippi before he attended Alabama State.