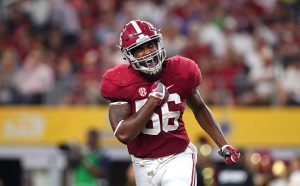 As you know I am a die hard Buffalo Bills fan, and we are learning that Tim Williams the linebacker from Alabama has already had a pre-draft visit with the Buffalo Bills.

We are learning that Williams was in town already for a pre-draft visit. There are several Mock Drafts that have the Alabama linebacker dropping to the second round.

What Tim Williams can bring to the Bills:

Williams explodes out of his stance and off the line, making him too explosive for offensive lineman and running backs off the edge. He has shown great foot quickness and ability to fall into coverage. His pad level is almost always lower than the man in front of him and allows him to run by players. He frequently timed snaps to gain extra steps on offensive lineman. The spin, swim and rip moves are all part of his repertoire in getting to the quarterback or running back. He has shown takedown and chase down speed, even on long plays that requires lots of running downfield.