Tom Brady solidifies himself as the best quarterback EVER 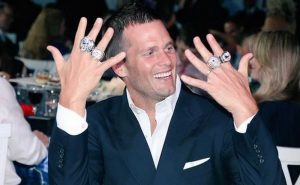 Tom Brady has one for his thumb

Can we please call Tom Brady the greatest quarterback to ever play the game?  These are the records he broke last night in the Super Bowl.  Thanks to CBS Sports, this break down is pretty simple to understand that Tom Brady is the best to every suit up.

Brady’s completion total broke his own record of 37, which he set in Super Bowl XLIX. Brady’s 62 passing attempts broke Jim Kelly’s previous record of 58, which is a mark that had stood since Super Bowl XXVI.

Also, let’s not forget about that yardage total: Brady’s mark of 466 yards smashed Kurt Warner’s old record of 414 yards, which was set against the Titans in Super Bowl XXXIV.

The quarterback’s two touchdown passes against the Falcons gave him 15 for his career in the Super Bowl, which is four more than second-place Joe Montana.

By tacking on 43 completions, 62 pass attempts and 466 passing yards to those records, Brady probably put them far out of reach. The Patriots quarterback is now at 309 pass attempts, 207 completions and 2,071 yards for his Super Bowl career.

Brady also won his fourth Super Bowl MVP award, which moves him past Montana on the list for most awards won. The Super Bowl win was the fifth of Brady’s career, which ties him with Charles Haley for the most Super Bowl wins by one player.