Terrell Owens takes a shot at Cris Carter; Says he is better 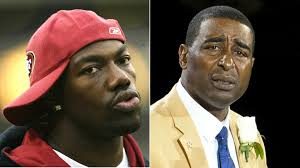 Terrell Owens believes he is better than Cris Carter. What do you thinK?

Is Terrell Owens better than Cris Carter? If you ask T.O. he will tell you he is.

Terrell Owens, who played 15 seasons and had 1,078 receptions for 15,934 yards and 153 touchdowns, announced that he had “lost all respect” for the Hall of Fame. This week,he took as shot at former NFL wide receiver Cris Carter, whom Owens cited as having more character issues than he did during his playing days.

“Even you think about guys that have gone and really tried to attack my character and called me a flawed candidate, a guy like Cris Carter — trust me, I’m better than Cris Carter,” Owens told WFAN’s Mike Francesa. “I’ll tell him that. He knows that I’m not a fan of him.

“He wants me to wait because he had to wait. I did more with less. I was better than Cris Carter. So he shouldn’t mention anything about anybody, especially me, about being a flawed candidate when here’s a guy who got released, flunked three drug tests from Philly — cocaine and alcohol addiction — and then there was somewhere down the road he’s telling guys to ask somebody to be a fall guy. What kind of character is that?”

I want to know what you think? Do you think Terrell Owens is better than Cris Carter?