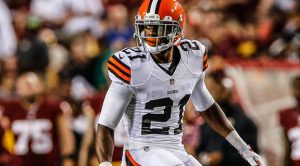 Today the Pittsburgh Steelers cut former Browns first round pick Justin Gilbert. Gilbert was drafted by the Cleveland Browns of the National Football League (NFL) with the eighth overall pick in the 2014 NFL Draft after playing collegiate football at Oklahoma State.

Gilbert was considered one of the top cornerback prospects for the 2014 NFL Draft.  I doubt anyone will claim Gilbert because of the price tag, but he will have plenty of suitors for futures contracts.

I would not be surprised to see the Bills explore this option via futures.