Shayne Graham has retired from the NFL after 15 seasons 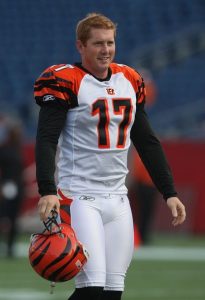 Shayne Graham is making a case for first ballot Hall of Fame right?

Today Shayne Graham announced his retirement from the NFL. The 39 year old kicker played 15 NFL seasons and most recently filled in for the Falcons in 2015. He spent seven years with the Bengals and was named to the Pro Bowl in 2005.

In all, Graham kicked in 178 career games for the Bills, Panthers, Bengals, Giants, Patriots, Ravens, Dolphins, Texans, Saints and Falcons. He made 277 career field goals in 324 tries. He is tenth all time in percentage, which is impressive.  That is 41 higher than Morten Anderson who was inducted into the Pro Football Hall of Fame this week.

He played for 10 of the 32 NFL teams.  That is impressive. I wonder if it is enough to get him in the Pro Football Hall of Fame?  I mean Morten Anderson made it because he played 15 plus years.