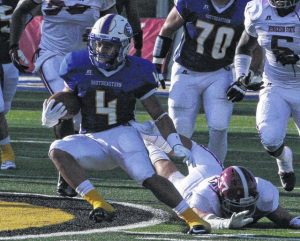 Ronnie Green is the smartest running back I have ever interviewed. I love his ability to understand stocks. He has a bright future

I help start a non-profit organization named “Future Stars of America” dedicated to serving our campus and community (Durant, Ok). We provided community service for the city of Durant, OK but we served the “Boys and Girls Club” often mentoring the youth as well as our campus by providing self-development workshops. We also put together fun activities for the campus to grow school spirit.

Computer Science in Algebra, Learning how to code was not the easiest objective. I’m glad I learned!

That’s easy for anyone who knows me; it’s my Dad, The greatest man in the world. He’s always picked me up through the bad times and kept me humble through the good times. He not only taught me how to be a man of God but he showed me through his life of hard work and dedication. He’s always growing even after all of his accomplishments, financially, mentally, and spiritually and he remains humble and down to earth. He gives back to so many people, not just with money but mentally through his teachings and the time he spends doing that. He just went viral from a video my step mom recorded on Facebook; he gave a waiter name johnny $300 because he believed God wanted him to pour in Johnny’s life. Johnny (Waiter) was working extremely hard but was treated badly by customers.

Not after my freshman year in high school but I’ve been a return specialist.

My vision and explosiveness.

I study defensive tendencies and coverages. Paying attention to how well the Safety or LB can fill a hole. If the safety is timid and is slow to read runs, then we take advantage of him. Also, the passing game is a key factor. If the defense is caught in cover 1 or 0 a lot the mesh and underneath route scheme seemed to work so I look for that to see how the OC could use me out the backfield.

I would say LB Josh Davis from Henderson State. He caused a lot of disruptions, and he flew to the ball no matter where he was on the field.

Barry Sanders, He was 5’8 200 pounds just like me. He made plays out of nothing, and he was elusive. I watched him and Walter Payton old film in highschool, but I took more after Barry in my style of running.

Being homeless after leaving Blinn Jr College coming back to Southeastern. I was working my way to get back in the Southeastern Football program after leaving my freshman year trying to chase my D1 dreams still. I was too prideful to ask my parents for help because I made some bad decisions including being able to live in the campus dorms, but I wanted to fix it myself. I had little money to get food, but I did spread it out, so I learned how to budget lol. I had to sneak and take showers in the student union REC bathroom. Going to class was tough, but I was hungry for an opportunity to learn and play ball.  I asked our campus church BCM to help me out, but they denied me. I was eventually offered a place to stay for free after a complete stranger noticed me working hard on the field and in the weight room every night. He also noticed I was sleeping in my car lol. Which is now one of my good friends that I consider my brother. Being homeless taught me a lot about life and the things we take for granted. It made me a better individual, and it was a lot of growth from that. That next semester I was back on the team, had a job and had enough saved up to get an apartment. No furniture for a whole two months but it was the best feeling in the world to have a roof over my head. 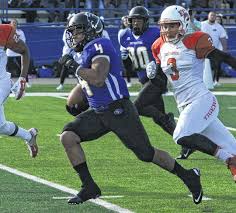 If Football falls through this kid will still make it

I listen to artist Jeezy, and I read scripture from the Bible and spoke my daily affirmations speaking to myself that “I am an NFL Running.” I even took a walk on the field and visualized myself making plays for my team.

My ability to rise under pressure and make plays in crunch time.

Hire me, and I will come in your club making the other players around me better by providing leadership, competition, and accountability. Not only will I produce for the team and make plays when needed I will boost ticket sells with my playmaking abilities that you and the fans will love to see. Hire me, and I will continue to help you put food on your families table and maybe help you get that Ferrari you always wanted. I will work with you and all the staff and team to help us build a championship team. Rather that’s starting on the practice squad or getting an opportunity to play on game days running down on kickoff or returning kicks. Doesn’t matter I’m helping the team win.