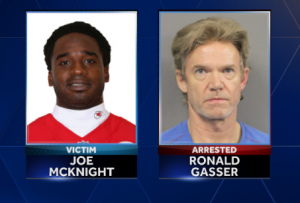 Ronald Gasser has been indicted for killing Joe McKnight

The man accused of shooting and killing former NFL player Joseph McKnight was indicted on a charge of second-degree murder, according to WDSU.com.

Ronald Gasser Jr. was first arrested in December for manslaughter. McKnight was killed on Dec. 1 in an apparent road rage incident with Gasser at a Terrytown intersection.

Gasser shot three rounds from a .40-caliber semi-automatic handgun from the driver’s seat of his car through the open passenger window, the Jefferson Parish Sheriff’s Office said.

A representative with the Jefferson Parish public defender’s office said in December that Gasser was assigned an attorney and his bond was set at $500,000.