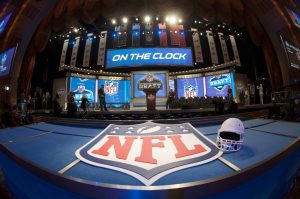 Tony Villiotti of @Draftmetrics breaks down the NFL draft. This is an amazing piece

One of the most exciting, if not the most exciting, Super Bowls is now behind us and the NFL offseason has begun. The highlight of the offseason is always the NFL draft. The draft is absolutely my favorite event of the year (please do not tell my wife). I have been following the draft since the Steelers drafted Joe Greene in 1969. Joe is actually four days younger than me, so thinking about that draft comes with mixed emotions.

My NFL draft interest has evolved from researching prospects (an activity which once had very few “draftniks” in the ilk of Joel Buchsbaum and which has exploded in recent years as technology opened doors to more information to a broader group of people) to maintaining a draft data base that is annually updated to include the most recent 20 years of historical information. NFL Game Books are my principal source of information for the data base. The data base includes a variety of information including each player drafted, his size, his college, the playing position announced when drafted, the number of games started, career longevity, years as a starter and postseason honors.

A supplemental data base includes the number of scrimmage plays (e.g., special team plays excluded) for each player. Five years of information are included in this data base, because that is the extent of the information to which I have access. Once again, the NFL Game Books are the primary source of information. If I live long enough, I would like to incorporate scrimmage plays into the main draft data base. It is hard to image, though, an 85-year old geezer still maintaining the data base.

I leave player scouting reports and mock drafts to other well-qualified reporters and amateur gurus. My focus is using historical data to put the draft in its proper perspective and to construct fact-based theories concerning the draft.

The goal of this article is to present some of that historical information in order to give the football fan insights into the draft process and outcomes. This article is presented in a question and answer format so that there is a focused presentation of the relevant draft information. I apologize in advance for the heavy use of numbers in the article but it is the nature of what I do.

How important is the NFL draft?

While it is only one piece of building a team (signing free agents and trades are also important) I think all fans from novices to life-long followers understand that the draft is an essential building block for any team. In order to evaluate just how important the draft has been, I used my supplemental data base to summarize the source of players involved in scrimmage plays. As stated above my scrimmage play data only goes back to 2012. Table 1, then, reflects the percentage of scrimmage plays for each draft round in the 2012-2016 seasons.

Table 1 shows that earlier selections are indeed more successful than earlier choices and shows the degree of difference. The most surprising finding, at least to me, is the high percentage of Undrafted Free Agents participating in scrimmage plays.

Are all selections within a round of equal value?

I think we all know that the answer to this question is no. But where are the “cut-offs”? Determining the cut-offs is a very subjective determination. To help in the process, I considered the probability of achieving several criteria. Other criteria could be used but these are the ones that are accessible and made the most sense to me:

Using these criteria and my judgment, Table 2 reflects nine sections of the draft (hereinafter called “Draft Sections”) with the draft positions included in each:

This means that, historically, there has been little difference in performance between the 1st pick and the 13th. For all but rookie starters (where the entire 20-year data base was used), the draft years used as the measurement period were 1997 through 2011. The 15-year period allows adequate time for players to achieve the criteria. Rookies either are rookie starters or not in the year they are drafted, so the 20-year period is appropriate for that measure.

Of course they do but the variances are not consistent throughout the draft. In other words, the selection of quarterbacks may be advantageous in Draft Section 1 but not in Draft Sections 4-9.  Tables 5 through 7 show the raw data for each playing position by Draft Section.

Before presenting the tables, some explanation of the columns is required:

The following observations are offered:

What can a team expect from the draft?

Many fans have an unrealistic view of how much help their team can expect from a draft. The Steelers, for example, drafted three players who ended up being defensive starters as rookies in the 2016 draft. That is an exception and a team cannot reasonably expect that to happen very often. Tables 9-12 show what a team can reasonably expect.

The expectation, of course, depends on the number of selections and where a team drafts. The numbers in the following table will need to be adjusted upwards once compensatory draft choices are awarded and to adjust for any trades, but here is the expectation based on 224 (7 x 32) draft choices. In recent years there have been between 252 and 256 players drafted. The numbers shown in Table 9 through 12 are the number of players for each draft position.

The tables show the following:

Which NFL team has drafted the best?

Most fans have preconceived notions regarding which teams draft well. This is usually based on anecdotal information or what their heart wants to believe, good or bad. Determining the best drafting team on an objective basis is difficult at best. How do you measure draft success? It seems to me that the last five years is the period to use in the evaluation as it is most indicative of a team’s success or lack thereof. But what should be the measuring stick? Number of starters? Most players with post-season honors? The length of a player’s career?

This measure has its own set of flaws, but so does any other measurement methodology. The principal flaw in the selected measurement is that there is no weighting of a scrimmage play by an impact player versus a blocking fullback. Playing opportunities are also relevant. A bad team should, in theory, present more opportunities for scrimmage plays than a good one.

Table 13 does not appear to reflect a positive correlation between my rankings and success on the field. I am sure you are as surprised as I am that the Colts rank first. If this analysis was done using a different criteria it is quite likely that we would end up with a completely different ranking.

The table reflects all players drafted by a team, not adjusted for players who have gone on to play for other teams, allowing for a measure of draft-day(s) efficiency.

Best and worst drafts by year when are shown in Table 14:

The following is worthy of special mention: