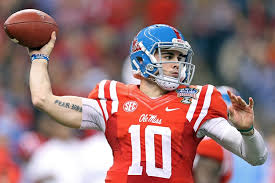 Ole Miss quarterback Chad Kelly reportedly was originally invited to the NFL Scouting Combine but had that offer rescinded, according to ESPN’s Bill Polian.

Kelly ran into an abundance of trouble at his two college stops. Clemson kicked him off the team for what Dabo Swinney described as “a pattern of behavior that is not consistent with the values of our program.”

Kelly was not the only person that wasn’t invited. Kelly joins Joe Mixon (Oklahoma) and Ishmael Zamora (Baylor) as players who were not invited due to off-field issues.